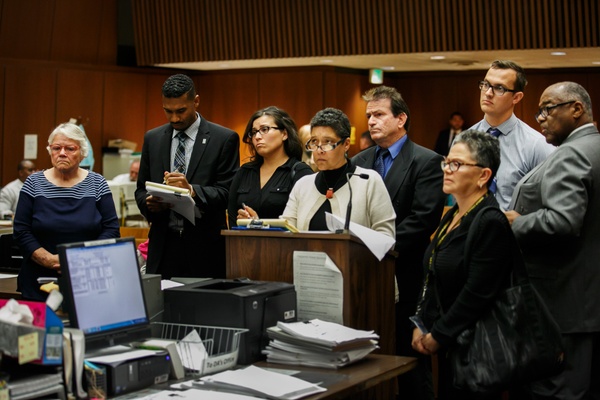 Four Los Angeles County social workers have been charged with felony child abuse and falsifying public records in connection with the 2012 death of 8-year-old Gabriel Fernandez, who was tortured and killed even though authorities had numerous warnings of abuse in his home.

Los Angeles County prosecutors allege that  county Department of Children and Family Services employees minimized “the significance of the physical, mental and emotional injuries that Gabriel suffered … [and] allowed a vulnerable boy to remain at home and continue to be abused.”

Social worker:  In a Section A article on April 8 about criminal charges for four child protection case workers, The Times said supervising social worker Gregory Merritt earned $166,000. His total compensation in wages and benefits was $116,000.

At their arraignment Thursday afternoon, the defendants did not enter pleas, pending another hearing later this month. Superior Court Judge Sergio Tapia set bail for each at $100,000.

Gabriel's death sparked widespread outrage and prompted a series of reforms designed to improve how county officials monitor children who show signs of being abused.

Prosecutors said the social workers' actions were so troubling that they warranted the rare step of filing criminal charges.

“Social workers play a vital role in society. We entrust them to protect our children from harm,” Dist. Atty. Jackie Lacey said in a statement. “When their negligence is so great as to become criminal, young lives are put at risk. We believe these social workers were criminally negligent and performed their legal duties with willful disregard for Gabriel's well-being.”

The dead boy's mother and her boyfriend are awaiting trial on charges of murder and a special circumstance of torture. They have pleaded not guilty. The pair are accused of beating Gabriel to death after dousing him with pepper spray, forcing him to eat his own vomit and locking him in a cabinet with a sock stuffed in his mouth to muffle his screams, according to court records.

Detectives who searched the family's apartment found a wooden club covered in his blood.

In the months before the boy was killed, county child protection caseworkers and sheriff's deputies investigated allegations of abuse without removing Gabriel from the home. Shortly before Gabriel's death, officials decided to close his case.

The social workers were aware that the boy had written a suicide note and had a BB pellet embedded in his chest. Yet he was not sent for medical treatment or a mental health assessment, county records show.

Additionally, the boy's teacher said she made repeated phone calls reporting evidence of abuse. The caseworkers disregarded them, she said.

A complaint for an arrest warrant was filed against the workers March 28 — about three years after their alleged failings — and all were scheduled for arraignment Thursday.

Merritt was the first to arrive in court in downtown Los Angeles on Thursday morning.

Asked for his reaction to the charges against him, Merritt told a reporter, “no response.”

Clement, a former nun and chaplain in the county's juvenile detention centers, sobbed in court as she awaited arraignment. She, too, declined to respond to the charges, as did Bom, a supervising caseworker and father of four young children as well as an elder at his church.

In a prepared statement issued late Thursday morning by the Department of Children and Family Services, department Director Philip Browning said the accused workers did not represent the organization.

“In our rigorous reconstruction of the events surrounding Gabriel's death, we found that four of our social workers had failed to perform their jobs. I directed that all of them be discharged. Only one appealed his termination, and he was reinstated last year by the Civil Service Commission over our strong objections,” Browning said.“I want to make it unambiguously clear that the defendants do not represent the daily work, standards or commitment of our dedicated social workers, who, like me, will not tolerate conduct that jeopardizes the well-being of children,” Browning said. “For the vast majority of those who choose this demanding career, it is nothing short of a calling.”

In an interview with The Times on Thursday, Browning said he had referred the social workers' case notes to the district attorney in 2013 “to make sure we didn't miss anything,” but he was not aware that a criminal investigation was gathering steam, and he said he was surprised when he learned that charges were filed.

After Merritt appealed to regain his $166,000 job as a supervising social worker, the five-member civil service commission — which is appointed by the county Board of Supervisors — voted unanimously to reinstate him, imposing a 30-day suspension in lieu of termination.

According to the commission's hearing officer, “In the final analysis [Merritt] bears some culpability for lax supervision but not to the extent to justify his discharge after nearly 24 years of unblemished service.”

Merritt's union representative had argued that his client was used as a scapegoat and had labored under difficult circumstances in the Palmdale office, where social workers carry some of the highest caseloads in the county.

County lawyers for Browning went to Los Angeles County Superior Court in hopes of overturning the civil service commission's decision. That case is ongoing, but the judge ordered Merritt's reinstatement until a decision is reached.

Browning said the performance of the four workers in the Fernandez case was the worst he had seen in any case he'd reviewed since his arrival at the agency in 2011.“We made so much progress in the past few years,” Browning said. “I don't want the morale of the department to suffer in a way that would impact services to clients.

At a news conference Thursday in Sylmar, family and friends of Gabriel praised the arrests and decried a system they said was fraught with laziness and corruption.“You brought this upon yourself,” Emily Carranza, the boy's cousin, said of the social workers.

Carranza is part of a group of family and friends who rallied after the boy's death, determined to hold those who killed Gabriel and those who failed to protect him accountable.

“Your conviction will be our greatest victory,” she said.

Child welfare officials and prosecutors said that this was the first case in memory in which child protective caseworkers had been criminally charged in California over the alleged mishandling of a case. Such prosecutions are also rare nationally, although New York prosecutors pursued criminal charges in recent years against two social workers who handled the fatal case of 4-year-old Marchella Pierce.

In that case, the workers were initially charged with negligent homicide, but the case collapsed in a plea deal for lesser charges.

Both workers eventually pleaded guilty to endangering the welfare of a child, and that misdemeanor was subsequently knocked down to a violation when they completed hours of community service.

Having read this terrible story that this child suffered I can only say that at least the Justice system in California seems to actually hold those In authority to account.

I am from England and we had a case [known as Baby P, he was tortured and killed by his mother and her drug addict partner], those social workers entrusted with this child's safety all kept their jobs and are still working [despite the fact that they were clearly incompetent], except one woman who was sacked by the Home secretary, however she then sued the state and won hundreds of thousands of pounds in damages for wrongful dismissal .

And to add to the insult these were the same agency people in which another child had also died in a similar way several years before.

Over here when things like this happen we ALWAYS get the same soundbite "lessons will be learnt", they never seem to be however ,the easiest way for these lessons to be learnt is to chuck these idiots in jail with the scumbags that actually carry out these crimes and remove any pension they have accrued in the process, it wont take long for the lessons to be learnt then.

So are we to have compassion for the four? I think not. This is an horrific injustice against this innocent child. Surely the extended family, school faculty and police did what they needed to do but DCFS lied and made it look as though they were deeply involved while this poor baby was continuously being tortured. All I can say had it been my relative and I knew that noting was still being done, I would have taken him myself and deal with the consequences later. No way this should have happened over and over and over. It's sickening how they just lied. I know many of those social workers are overworked, but however, they took the job and reaped its benefits! Money, stolen gift cards, luxury cars, homes, flexibility at work and so forth. ALL YOU HAD TO DO WAS REMOVE THE CHILD AND LET THECOURT SYSTEM, MED DOCTOR, CHILD PSYCHOLOGIST DO THEIR PART. But its laziness and greed so no there should be no compassion, mercy given. Severe punishment is in order. Just so sad and heartbreaking. RIP Little JusticeforGabrielFernandez.

H.W.
"Where were these outraged family members while the boy was being abused and tortured to death?"

Totally agree! If I saw evidence of a young relative being abused (which, in this case, was indisputable), I would have intervened....absolutely!

A very real problem everyone ignores is how DCFS handles abuse reports of children that are already in their (dcfs) care, like Gabriel. The mostly squash them and BYPASS the entire investigation phase. Sometimes it comes with a dose of retaliation by the dept towards the reporting family member. This case seems to be no different in how these reports/cases are handled. DCFS just bypasses all the reports and forwards them to an overworked social worker who surely quashes them. Children already in the system/foster care are the ones who remain UNPROTECTED. I guess they don't deserve new investigations.

Where were these outraged family members while the boy was being abused and tortured to death? Their victories don't mean much at this late date.