Mother hears gunshots, then detectives knocking on her door: Her son is dead 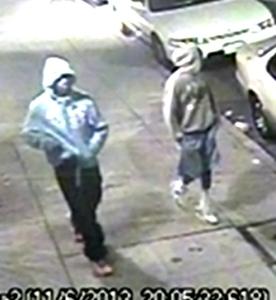 The night Martha Tovar’s son was killed, she heard three loud pops shortly after 8 p.m. outside her one-bedroom apartment window in Pico-Union. She wondered to herself if the sounds were fireworks or gunshots.

About an hour later, she turned on the television and waited for her son to arrive home from work.

About 1 a.m., detectives knocked on her door.

Atilio Benavides-Amaya, 39, had been shot about a block away. She realized she had heard the shots.

“I felt bad; I felt like my heart burst because my son was gone,” she said. “But why? Why did they kill him? He never got involved with anyone. He was a humble worker.”

Benavides-Amaya typically rode the bus to and from his job as a clerk at a 99-cent store. That night, he had gotten off the bus and was on his way home when two men walked up and shot at him multiple times at close range, said Los Angeles police Det. Reynaldo Martinez.  The two men, described by witnesses as black and in their 20s or 30s, ran away from the scene and may have gotten into a dark SUV.

On Wednesday, police and Los Angeles City Councilman Gil Cedillo announced a $50,000 reward for information in the killing.

Police also released surveillance stills of two men, one wearing a light-blue Aeropostale sweatshirt, seen in the area at the time of the killing.

“This young man came to this country seeking a better life, and unfortunately, he lost his,” Cedillo said.

Benavides-Amaya fled El Salvador in late 2010 to live with his mother in Pico-Union. His father died on his way to work in the Salvadoran civil war when Benavides-Amaya was a child. Benavides-Amaya, who liked to DJ at local clubs in his spare time, sent money home to El Salvador to support his 10-year-old child.

“He was not here very long; he was here too short of a time,” Tovar said.

Image: Police are searching for two men who were seen on surveillance video walking in Pico-Union near where Atilio Benavides-Amaya was killed Nov. 6, 2013. Credit: Los Angeles Police Department

Wow Therese guys are so hard , shooting a unarmed innocent person , I bet those clothes they Aaa 're wearing their mother bought it for them , bad things are coming to them

Ugly cowards! Was a real gang fight too hard for these scum?

Look how they walk. Embarrassing people!

I hope the LAPD puts a Los Angeles-wide man hunt for these losers. And the fact that a Councilmember or city official is getting involved in solving this murder should help get these killers off the street even faster.

Benavides-Amaya was trying to live his life and support himself, his mom, and his child in El Salvador. This is just a sad story.

Very sad, these sensless killings need to stop. You cannot put a price on a life . Life is priceless! heart goes out to this forever grieving mother.

Sorry for your loss it makes me bad hear things like this I grow on 6th st I lost a little brother in 95 he was only 16yr for helping a person who got shot in the leg and then they shot him kill him and my mom was taking shower I was living Riverside at that time and now am take care her and my brother she is 75 and my brother is 38 but both or sick if I had money I will put boys and girl club stay out bad things it fill sad see your mom with a sad face and I hope someone will put something on this streets they only putting apt put like something for this kids and again am very sorry . :(