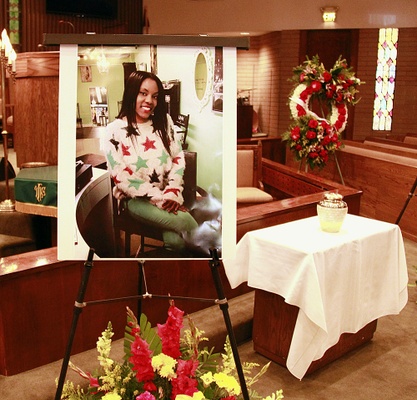 Lajoya McCoy was not one to miss appointments or leave a text unanswered. So when McCoy, 31, didn’t show up for work June 10 and failed to pick up her sister from a bus station, her friends and family knew something was very wrong.

On Friday, more than 100 people attended a service at the First African Methodist Episcopal Church in Pasadena to honor McCoy, who was found dead in her vehicle June 16. The Monrovia businesswoman and single mother was remembered as a joyful, selfless presence who was always eager to help those around her.

“This young lady was phenomenal, just phenomenal,” the Rev. Kenny Baker said during the service. “Who will replace this voice that has been silenced; our example of strength and faith?”

McCoy juggled a full-time job as an auditor for the Los Angeles County Department of Public Health with raising her two children, ages 5 and 9. She also ran her own businesses on the side. She produced a movie and play, owned a women’s clothing store and was recently trying to start her own phone app for finding quality DJs.

McCoy had just closed her store, Joya Boutique, in Monterey Park with the goal of reopening at a higher-traffic location in Pasadena in July. She was bringing her younger sister from Las Vegas to stay with her during the summer to help at the store.

“I knew something was wrong, because I started calling her in the morning, to tell her her sister was on her way, and she never responded,” said her mother, Summer Jackson. “The alarms just went off, because that was not like her at all.”

Los Angeles County Sheriff’s investigators have released few details about the killing and information about her autopsy and cause of death have not been made public. Her family has set up an account to help with burial expenses and care of her daughter and son.

After friends and family reported her missing, Monrovia police on June 15 checked McCoy’s apartment in the 800 block of West Olive Avenue and found evidence of foul play, according to a sheriff’s department news release.  The next day, investigators found McCoy’s silver Toyota Camry in the 200 block of West Cypress Avenue, about a mile from her home.

Inside was the body of a black female, but because of the condition of the remains, investigators said, the body wasn’t identified as McCoy’s until June 23.

Bernie Stephenson, a close friend, said she met McCoy for dinner on June 9 and was one of the last to see her alive. McCoy’s children were with their father, who took them on alternate weeks, Stephenson said. The two said goodbye about 9 p.m. and Stephenson never heard from McCoy again, despite sending her multiple texts.

Stephenson said she later learned that another friend called McCoy about 11 p.m., asking if she wanted company. McCoy said no, she was already in her pajamas, preparing for bed.

Her friends were feeling a little protective, Stephenson said, because in recent months McCoy had been the victim of harassment and vandalism; Her car tires were flattened, papers and personal items went missing from her apartment, and sometimes, she told friends, she felt like someone was peeping into her apartment windows.

But McCoy didn’t dwell on these problems.

“She’d say something about what was happening, and then she’d laugh it off,” Stephenson said. “She was always laughing.”

Several friends remembered how McCoy took a solo trip to Paris last summer, partly to get ideas for the store she opened in November. It was just part of her unquenchable optimism and her determination to succeed in all things, said her friend Louis Reyes. 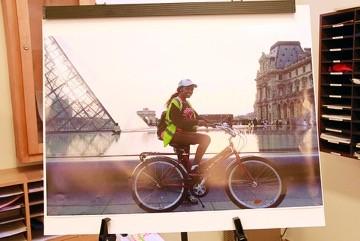 McCoy was also a “Dreamer,” one of the 84 Cleveland Elementary School third-graders in Pasadena who were “adopted” in 1991 by the I Have a Dream Foundation. The foundation offers support and college scholarships to needy students.

McCoy was one of the program’s stars, said retired sponsor Carol McGuire, who attended the service. McCoy earned a bachelor’s degree in media, film and broadcasting in 2006 and a master's degree in accounting in 2010, both from Cal State Los Angeles.

“She was our representative, a voice for us,” said Dominick Robinson, one of several Dreamers who attended the ceremony.

McCoy had a direct influence on the lives of at least two of her fellow Dreamers, She had hired Vanessa Galvez to help her open and run her new store in Pasadena. And aspiring actor Marshall Duncan recalled how McCoy had helped him land a small role in a play she produced in Pasadena.

“She gave tribute to the saying that the life of one candle can light a thousand other candles,” Duncan said during the service.

McCoy was an inspiration even to those older than her, Jackson, her mother, said later. She constantly encouraged her mother to pursue her interest in pharmacology.

“I told her I was too old, but she said, ‘Mom, you’re never too old to go back to school. You can do this,’ and I did, I did start taking a medicine class online, because of her inspiring me.”

Toward the end of the service, McCoy’s cousin, Bruce Turner, counseled restraint, telling friends and family to take care of each other, and “be ready” for what was to come.

Photo, top: Flowers, photos and a funeral urn at the celebration of Lajoya McCoy's life at First AME Church in Pasadena. Credit: Jeanette Marantos / For The Times. Center: Lajoya McCoy poses for a photo last August, during a solo tour of Paris, in a family photo on display at the service.

Damn shame.....i repeat, that's a damn shame. What is happening to america. I hope and pray that they find the murderer. I hope things get better, but it seems like it's not.....That's sad

This is a heart-breaking story. I feel like I almost knew this girl after reading it. She must've been an amazing person. My heart goes out to her family, and friends. The world needs so many more people like her, and then suddenly all of us are robbed by the "light" this girl obviously added to an ever growing darker world. God Bless her. May she Rest in Peace, and her family find strength in her memory

My prayers and condolences go out to the Mother, Children and friends of this beautiful sister, My prayer's that though her tragic passing, u will b comforted.Stay strong n remember that GOD will see you thru.I'm praying4 all of you.As 4 the beast that did what he/she did u will get back what u sowed by GOD....Big x