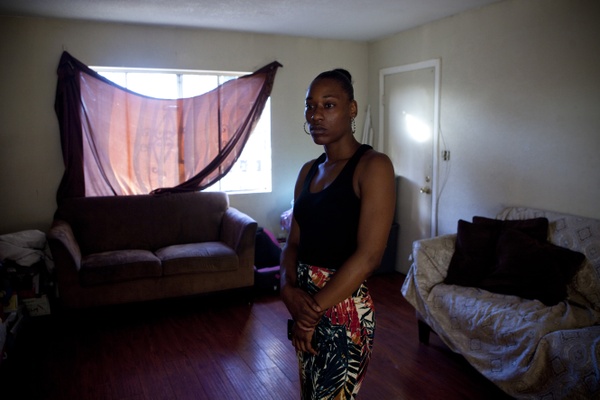 Benjamin Washington answered the phone and froze. His son, Mykel, was dead, daughter Jaquel Robertson told him. Washington immediately left his house and drove to the crime scene in Westmont. He had to see for himself.

A three-mile drive placed the 58-year-old father at the end of the 8800 block of South Vermont Avenue. Washington pressed through a crowd and stopped at the yellow crime scene tape.

He instantly recognized his son. A parent knows his kid, he said.

Jaquel Robertson, who lived with her brother, said Mykel Washington left the house around noon June 10 to ride with a friend to a liquor store. She was waiting for him to come back so she could tell him to pick up his socks in the bathroom. Minutes later, she heard gunfire.

“Those shots sounded so close, and I knew Mykel was nearby. I sort of put two and two together in my head, but it just didn’t make sense,” Robertson said.

Investigators said Mykel Washington, 24, had finished speaking with a friend on the corner when a vehicle pulled up behind him. A gunman stepped out from the passenger side and opened fire, striking Washington and three others, including a woman standing on the sidewalk, said Los Angeles County Sheriff’s Department Sgt. Steve Rubino. Mykel Washington died at the scene, according to coroner’s records. The others survived.

Police are still canvassing the neighborhood for leads about suspects.

The shooting marked the 11th homicide — including two on March 25, when a man shot his girlfriend and was killed by sheriff’s deputies less than an hour later — in Westmont in 2015. So far this year, Westmont is the deadliest neighborhood in Los Angeles County, according to Times analysis of homicide data.

“Mykel was just out at the wrong time. And there was nothing I could have done to stop it,” Robertson said. “That’s probably what hurts the most.”

A couple of days before Mykel Washington’s funeral, which was Friday, Benjamin Washington and Robertson recalled their memories of him.

Robertson remembered her brother as her protector, although he was several years younger.

“Any time I would begin to see someone, he liked to act all big and want to meet them,” Robertson said, puffing out her chest and flexing her muscles, mimicking her brother.

Then she fell back into the couch and smiled. “I’m gonna miss him.”

Benjamin Washington pensively looked out the window as he mulled over the list of tasks for his son’s funeral. Then his relationship with his son flashed through his head.

Mykel Washington left his father’s home at age 19, after he refused to live by his father’s rules. But the two had rebuilt their relationship over the years. During one of their final conversations, they had reconciled.

“I didn’t know he still thought about that moment because we were so close now,” Benjamin Washington said. “I’m glad we at least had a chance to put everything on good terms before he was taken from us. I can find some sort of rest in that.”

Photo: Jaquel Robertson in the Westmont home she shared with her brother, Mykel Washington, who was shot to death nearby June 10. Credit: Bethany Mollenkof / Los Angeles Times

I read the article on your loved on Mykel Washington. We have never met. I just wanted to tell you I am so sorry to here of your loss. I can understand your anger when people write false info. Saying he was a bad person is not only demeaning and disrespectful to his memory its hurtful. People should have compassion to the family members and friends left behind to deal with what is the worst grieving process the loss of a loved one to murder. I say this because I too lost a loved one my best friend and partner to a since less murder. I am beyond sick with grieve and to then read in every article that he was homeless makes me hurt sick and an anger I cant explain. It makes him sound less important and I fear his investigation will be less than others. I have written as many papers as possible telling them to get their fact straight he was never homeless he lived with me in Palos Verdes and Palm Springs. It was because he had no ID on him at the time he was shoot 3 times in his upper chest while waiting for a friend in Long Beach and I fear because he was also mexican they said this. His name was Iran F Maese killed jun 28. I will never be the same or understand why these young people can simply end the life of someone and even the life of all those he touched. Iran was only 35 yrs old.God bless your family and ours, may they both be at peace in heaven.

It is so not appropriate to speak on Mykel as if he was a bad person.Indeed that wasn't the case.I knew him personally and he was simply a product of his environment. That doesn't mean that his heart wasn't good.Infact I spoke with his mother days after and she informed me that Mykel knew the Lord and talked about him frequently. This case is just as sad as the rest of the young men that have lost their lives to the streets. Bullets have no names!

@Just Keeping it Real
My son was at the wrong place at the wrong time and he was murdered and HE WASN'T in a gang it was considered "gang related" because the shooter was. We qualified for Victims of Crime. Detectives and the Gang Unit know when a victim is a gang member or not and pass that info to Victims of Crime. It's sad that you think the way you do losing a child is the worst pain any parent could go thru ! I don't think it would hurt any less because they were gang members

You are probably right about his gang affiliation. It's still tragic, RIP. However, families who comment here usually if not always say, "My Son or Daughter was not in a Gang" even if they were NOT because they will NOT qualify for Victim Compensation.

I remember when mykel first got shot, he was with mike douver a documented 83gc..he was killed during that attack...doesn't seem random the shooters knew mykel ..he been from etgc for awhile now even tho he is a kid... most gangs shootings in LA are not random