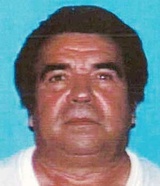 Oscar Orlando Torres, a 64-year-old Latino, was found dead Thursday, July 17, in the 8100 block of Zamora Avenue in Florence-Firestone, according to Los Angeles County coroner’s records.

Torres, who lived in a converted garage, was found dead by his son, said Lt. Eddie Hernandez with the Los Angeles County Sheriff’s Department.

Torres’ son became concerned after he did not hear from his father, Hernandez said. Torres was last seen alive July 16.

Torres was pronounced dead at 6:56 p.m. at the scene. He died from blunt head trauma, according to coroner’s records.

Do you have information to share about the life of Oscar Orlando Torres ? The Homicide Report needs your help. Please fill out this form or e-mail us at homicidereport@latimes.com.

Share a memory or thought about Oscar Orlando Torres