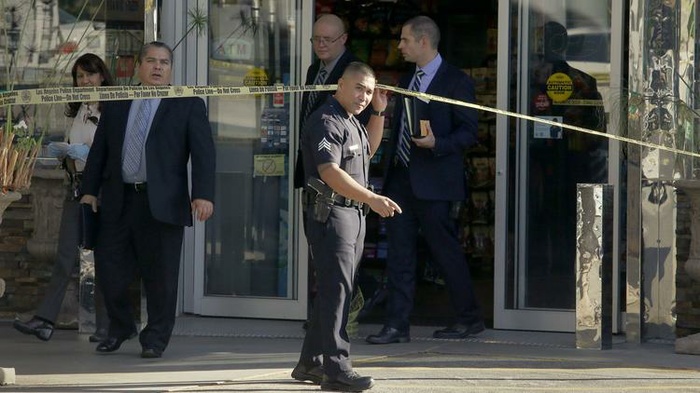 Two men have been charged in connection with a string of armed robberies that left two others dead in Los Angeles neighborhoods miles apart in the span of a single day last month.

Kayshon Moody, 25, has been charged with two counts of murder and two counts of second-degree robbery stemming from the killings of a 34-year-old man working at a Chevron station in Los Feliz and a 50-year-old man working at a marijuana dispensary in Mar Vista, according to a criminal complaint filed by the Los Angeles County district attorney’s office.

In addition, Moody has been charged with robbing a fast-food restaurant in the Sawtelle neighborhood of Los Angeles on Jan. 17, according to the complaint.

James Eastman, 21, was charged with one count of murder and one count of second-degree robbery in connection with the dispensary slaying.

Eastman also faces one count of second-degree robbery stemming from a separate crime in Glendale.

The violence began at 1:55 a.m. on Jan. 17, when a man walked into a Big Tomy’s restaurant in the 11200 block of West Pico Boulevard in West Los Angeles and ordered a soda, according to a search warrant affidavit obtained by the Times.

While the cashier was ringing him up, the customer pointed a gun at him, then left with the cash drawer, according to the affidavit.

About an hour and a half later, Mohammed Rahman was working at a gas station at Vermont Avenue and Los Feliz Boulevard in Los Feliz when a man walked in, grabbed several items and placed them on the counter.

The man handed the money to Rahman, then pulled out a gun and shot him. Rahman was a graduate business student who worked nights to pay for school, co-workers told The Times.

Police reviewed security camera recordings from the gas station and saw that the killer was driving a white Nissan Versa, according to a search warrant affidavit.

The next morning about 11:30 a.m., Ovik Oganesyan, 50, was shot and killed while working at the marijuana dispensary in the 12400 block of Venice Boulevard in Mar Vista, police said.

Security camera footage from the area showed there were two attackers, who fired about 10 rounds, according to police.

That night at about 9:15 p.m., the American Market in the 1700 block of Lake Street in Glendale was robbed by a person with a gun who was wearing a hoodie over a white hat.

As the assailant was leaving, he accidentally dropped the hat.

Detectives from the L.A. and Glendale police departments noticed the similarities between the robberies and cooperated as they investigated, police said.

On Jan. 20, Glendale police said, DNA results came back showing that genetic material from the hat recovered at the scene of the robbery matched Moody.

That night, LAPD detectives found Moody driving a Nissan Versa and took him into custody, according to the search warrant.

Eastman, who was with Moody in the car, was released from custody but later arrested when investigators linked him to some of the crimes, police said.

The men are scheduled to be arraigned Feb. 21, according to a district attorney’s spokesman.

Photo: LAPD investigators emerge from a Chevron station mini mart where a store clerk was shot to death during a robbery in Los Feliz on Jan. 17. Credit: Mark Boster, Los Angeles Times