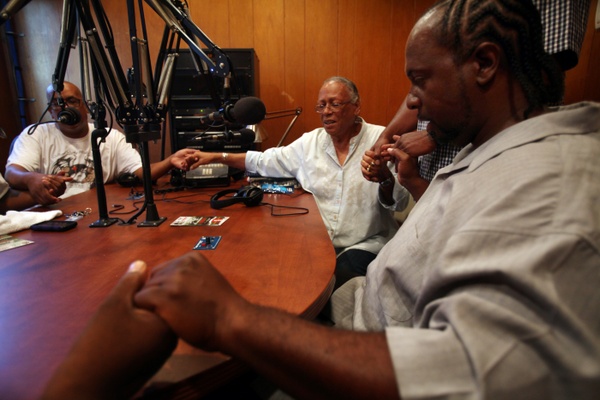 In the living room of her South L.A. home, 68-year-old Lita Herron pointed to a bullet hole in the stained-glass window.

Tissue was stuffed into the opening.

Herron still has the bullet. “I used to carry it around in my pocket,” she said. “It let me know that nobody’s immune.”

Herron has watched her children lose their friends to violence. She’s witnessed shootings — at a funeral and in her Vermont Square neighborhood. She's held a fatally wounded man in her arms.

After being out on the streets of South L.A. for years as an activist, Herron’s trying a different approach in hopes of making things better: The grandmother of six drives every Thursday evening to a wood-paneled radio station in Inglewood, sits down in front of a microphone and starts talking.

“I’m a little upset because it’s been a terrible holiday,” she said after a string of shootings Labor Day weekend that left five dead.

Called “Gang Talk,” her radio show was born from the violence in the streets. Herron and Skipp Townsend, a gang intervention worker, host frank discussions with former gang members, young people in the community, men and women who have lost family members to violence, and those working to make a difference in South L.A.

They've interviewed former L.A. County Sheriff Lee Baca and LAPD Chief Charlie Beck. Recently, they talked with a private investigator working on behalf of the family of Ezell Ford Jr., who was shot and killed by a police officer in August.

“We’re going to ask those tough questions, but we’re not there to attack them and put them on the spot and make a mockery of the interview,” Townsend said.

Shows have concentrated on post-traumatic stress disorder and the sex trade in South L.A. The purpose is to create a forum where guests can speak honestly about what it’s like to live in neighborhoods where violence is common.

The guests give a voice to those who have learned hard lessons on the streets.

“For me, it was a big hoax,” said Jason, who gave only his first name when he talked about gang life in Inglewood. “I’ve been tricked. It took so long for me to realize it that it’s actually sad. I’d like to share with the young brothers that it’s simply not worth it.”

David Williams agreed to be a “Gang Talk” guest just weeks after his stepson Aveion Curtis Bolden, 20, was killed. Bolden was on a double date in June when a car pulled alongside and 10 shots were fired, killing him and girlfriend Jacinta Walker, 18.

After the shooting began, the man in the car with Bolden and Walker fired back, killing a passenger in the shooter’s vehicle. Prosecutors declined to file charges against Bolden’s companion.

“They buried him on my birthday, June 27,” Bolden’s stepfather told “Gang Talk” listeners.

He also described what it was like trying to console his wife, Janet Sanders-Bolden.

“In a situation like that, I have to tell you that I don’t know what to say to her,” he said. “I can’t tell no woman that lost her child: ‘I understand how you feel.’ ”

Williams, who was known as “Termite” with the Eight-Tray Gangsters, told Herron and Townsend that he once had turned to drugs and alcohol to deal with low self-esteem.

“I see a lot of that out in the community now, where youngsters are using drugs and alcohol, and it’s destroying them.” he said. “It’s giving them a false sense of pride and arrogance and invincibility. It’s a solution to their problems.”

Recently, Herron and Townsend hosted a five-year anniversary show with Charlotte Austin-Jordan, who lost a 13-year-old daughter and a 25-year-old son to gang violence.

Herron choked up during the introductions: Austin-Jordan’s daughter, Jamee Finney, had gone to school with Herron’s daughter.

“The grief that she suffered from — it touched me. It still touches me,” Herron said.

Jamee had been riding home from the store with a friend when the car they were in was sprayed with bullets by gang members looking to retaliate for a failed drug deal. The gang members mistook the car Jamee and her friend were in for their target, and killed them both.

Jamee’s hands were so disfigured that they were covered by gloves for the funeral.

“Family, from 1988, this wound is still fresh in us,” Herron said. “And we don’t want you to think it’s going to ever be forgotten.”

UPDATE Oct. 24: This post was updated with station information at 7:17 a.m.

Photo: Skipp Townsend joins Lita Herron and Andre Lowdown Christian, from left, in prayer before an airing of Herron and Townsend’s radio show, “Gang Talk,” in Inglewood. Credit: Francine Orr, Los Angeles Times. Note: A previous version of this caption reversed the order of two of the subjects in the photo.

Brad Blalock,
Aren't they all?

Hello my name is Brad i live in Atlanta Ga. i have a Qu. To ask Mr. Townsend or any one with some advice, About tring to get my nephew storey heard about how he was rail road by his lawer and the d.A. Thanks you. 404-246-0131

Root cause is the thug criminal gang culture that some how keeps getting passed down generationally.

Tackle that, remove it like a cancerous growth and you'll see positive changes.

If you do not do that, nothing will get better.

Wow...this isn't a show it is a stage, give it a listen and you will see that it is more of a poor me I has no choice and I had no options and it wasn't me it was the devil. No hard hitting questions, or responsibility but just more of passing the buck.

You can see part of the problem that perpetuates the cycle in this article. A topic of discussion is Ezell Ford. LAPD was smart to not release the autopsy results knowing dozens of witnesses would come out of nowhere saying they saw what happened. Just like Michael Brown, the truth will come out. But let's fan the flames of racial discontent and not hold young men and women accountable for having children and letting the system parent them. Easier to point the finger outward than inward.

ktym 1460, also on tunein.com. I believe there's even an app for the phone.

Good work folks. I personally know skip Townsend and Andre Christian . I will be on the look out for this show.

This is a great show, will duplicate this in Philadelphia, Pa, will be in touch with the producers and Host of the show for input and advise, we have a african-american owned radio staion, WURD-900AM,

Oops I was in a meeting while I was sending out my pervious blog. There are a number of spelling errors. I should have paid more attention.

Yes VicuiousCycle,
There isn't an answer! I too had a mother who wanted more for her children than wondering about how am I going to pay the gas or light or water bills monthly. She pushed and guided and was my biggest cheerleader. I grew up in Boyle Hieghts and lived there through out high school. I don't think that "will" is something that you can give someone. If it was something that could be given away, there would be a line waiting for it. There will always be the unmotivated.

Your background check should eliminate misdemeanor charges. Violent people who have not gone through anger management classes/courses should be eliminated, of course. But a criminal record of minor offenses, ages old, must be cast aside if we are to be able to stop this man-made cycle. Use your better judgement and stop that revolving door back to prison for most offenders.

Jan Mack ; unfortunately, many low level offenders have the doors of employment slammed shut on them, which just drives them further and further into the clenches of criminality.

Everyone deserves a second chance and it should be given.

We as a society can no longer afford to keep feeding the prison industrial complex.

Wow...as an employer I want to know if the person I am hiring can be boneded. I want to know if my property is at risk. I want to know if my other employees are being put in a questionable situation. I want to know if there is a chance that this new hire is going to rip off my clients...either directly or be telling someone about the client. So needless to say I do not agree with this hidden background. I don't want my insurance to go up, I don't want my company to be lost to law suites...why should the innocent employer put my home, life and future on the line? I should know who I am hiring and what the risk are. Or are you also proposing that I be held harmless by hiring someone who I send to your home to do work and then he goes back and does a home invasion? Finish the thought on ex-cons getting hired.

LA Teacher, it a vicious cycle. How can Parents teach their Kids if no one has taught them? Some of us made it because our Parents had the 'will' to want a different, better life. A lot of us didn't because we didn't know how, including our Parents. I'm one of the lucky ones; my single-parent Mother raised 10 kids and had that 'will' I referred to. I posses three degrees and all but two of my siblings have at least one degree. I grew up on 60th and Western Ave. until the end of the fourth grade. We moved in 1970, just before all the gang activity became our reality. My daughter is 20 attending UCLA and several of my sibling's children also have degrees or are in college. The question is, how can we help the Parents that don't have that 'will'? How?

Must say again -- great story. Thanks for the update!

— Mike ; I agree wholeheartedly. Except for the most vicious of crimes, the criminal records should be sealed unless there is a compelling reason.

The parents of these kids also need to be put on the spot. Why did they not pursue education? I can tell you that South LA has some of the worst behaved kids in the school district. That has to change. There are opportunities for them but too many choose the route of getting pregnant early or getting someone else pregnant/

50% of all Registered Nursing students are men. This degree can be obtained at a community college. Why cannot these young men and women attend community college an obtain a degree with a state license? At my last school, most students showed no interested in anything but a low wage job regardless of how much the teachers and administrators tried to encourage them. Many were so lacking in basic etiquette and study skills that they couldn't overcome them to achieve. It was extraordinarily depressing.

once you make a mistake with the law you cannot get a job or it is very very hard, so what choice do you have but to do crime ? this must change ! What young man will watch his child hungry and not do something about it. If you do not give him another chance to work he will do what he has to do. This has long been the problem in South Central L. A. and Calif.

Great point Gabrielle. We have added that information to the story. Thank you for reading.

Why on earth would you do a story (really good story, by the way) about a radio show and not tell us what station the show airs on and what time?