At Vermont Vista vigil, a mother's grief is just beginning 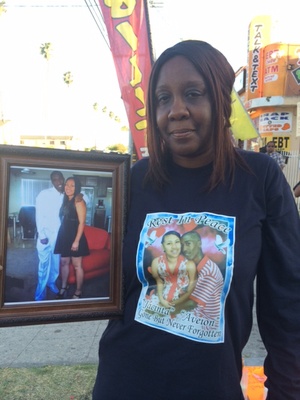 Before the candles were lit, the heads were bowed in prayer, and the calls for violence to end were shouted, Janet Sanders-Bolden met Roshon Davis on the side of the road, at a place where no one wanted to be: the vigil for the killing of her son. It was an encounter of two people who never wanted to meet.

Davis’ son, with the same name, was fatally stabbed Jan. 30. He said repeatedly that his son’s birthday — July 17 — is coming up. Sanders-Bolden’s suffering was just beginning. Davis has been living day-to-day.

“This just needs to stop,” she told Davis before joining the group of mourners gathered around dozens of candles, right across the street from where her son had just moved into a new apartment.

Just one day before he was killed, Aveion Curtis Bolden invited his mother over to show her his new place. He was proud.

The next night — Friday, June 13 — Bolden, his girlfriend, Jacinta Walker, and another couple had plans to go to dinner, then to go see "22 Jump Street."

The group of four got into a silver Toyota Camry about 10 p.m. Walker and Bolden sat in the back, while the other couple sat in front.

Shots rang out. The driver of the Camry, Anthony Alonzo Cudger, shot back.

In a matter of minutes, Walker, 18, Bolden, 20, and the gunman from the other car, Trevor Andre Williams, 33, were dead — the latest casualties in a ongoing string of shootings between two rival Crip gangs that has lasted for years.

At the vigil, held near South Figureoa Street and West Manchester Avenue,  Sanders-Bolden clutched a framed photo of her son with his girlfriend. Her eyes were expressionless as family, friends and community members walked up to her to hug her.

Sanders-Bolden’s fiance, David Williams, knew Bolden for eight years. He said Bolden got caught up in the wrong crowd but had a "heart of gold" and had received his high school diploma in January 2013. Sanders-Bolden said she planned to use a picture of him in a cap and gown on the front of the obituary for his funeral.

Late that night, her nephew called Sanders-Bolden and said, “I think Aveion’s been shot.”

She rushed to the crime scene and stood behind the yellow tape, hoping it wasn’t her son.  It wasn’t until 4 a.m. that her fears were affirmed.

When Sanders-Bolden had to go to the police station, she saw the vigil for the shooter, Trevor Andre Williams. She admitted she felt hatred.

“It was a weird feeling,” she said. But she acknowledged that justice, or the justice she’s settling for — has been served.

“The person who killed my son is dead,” she said.

Men and women walked up with tears in their eyes to place a candle at the vigil. Minister Tony Muhammad called for change. Sanders-Bolden hugged Walker’s mother, Carolyn Cole.

Sanders-Bolden told the crowd that her son wanted to have children with his girlfriend of a year and a half.

“They lost their lives together,” she said.

It is really sad; the ignorance of our black men killing each other and innocent people. My nephew was senselessly gunned down at a bus stop. The coward did not even look him in his eyes before he pulled the trigger. He shot my baby four times in his back. My peace with this is me and my family knowing that we serve a God who never sleeps. We may not know who the coward is however, God does. So judgment day is coming to you rather it be here on earth or in your death. You will pay!

This gang feud between the main streets and hoovers is no secret, there have been at least 11 or more casualties between the two gangs over the last few years and it's getting neither gang anywhere, they're pretty much killing each other simply because they hate one another, now what can one say to that, this has nothing to do with politics or education but rather the self dignity of these young man and woman involved in this nonsense...you don't need much of an education or political mindset to know that you shouldn't be out in the streets shooting people up. What can a politician do to solve THIS problem? absolutely nothing, this will stop only when cooler heads from both of these gangs understand the damage they're doing not only to themselves but to the community as well because gang members aren't the only ones being shot or shot at in this madness, innocent people walking the streets are paying the price as well but an innocent adult doesn't mean as much as an innocent child and to my knowledge no babies have been hurt yet. The damage has been done, many lives lost, not one dead soul from this feud is coming back, will cooler heads prevail? Or will the death continue? We'll have to see...

I have to say as a person that was raised in a two parent home, and was taught moral values growing up, this makes me sick to think people actually act this way. The black community needs to quit making excuses and take control of their hoods.And black woman need to start being strong and letting these worthless two bit brothers knock them up and make them raise kids on their own. Raise your kids to fight this ignorance, not be a part of it.

So, a group of gangsters and people who socialize with them are dead? Appears no innocent by-standers were harmed.. Why are people crying?

How sad & common this story is. Young victims nonetheless. As we continue the struggle to just barely survive economically, these type of deaths only add salt to our people's wounds, black & brown. I might not see you at the upcoming march this 28th Ms. Henderson, but I will be amongst you.

This is all so hurt it has to stop. This Saturday June 28th there will be a gang march titled Don't. Pull The Trigger. The march will start at 11250 Avalon Boulevard at 11:30 am for anyone who wants to support this movement hope to see you there.

Sometimes I think the media and society at large have victim fatigue. An endless river of black and latino suspects and victims. I guess that while many are sympathetic they have decided to wash their hands of the problem. And remember that many mainstream people ignore abstractions. But once violence hits home, once they FEEL, then they get involved.

This is insane...the shooter (Trevor) had just left the funeral of his best friend who had been killed on the 2nd. In this story alone there are four grieving families and extended families left behind. There are at least four other homicides on this report that are related to this story ALONE (not counting the ones prior and the shootings that have just occurred within the last two days). Everyone in the community know that the Main Streets are beefing with the Hoovers. There's no media coverage of this though. I only say that as a way to alert the "regular" citizens to take extra precautions because these clowns DO NOT care who they are gunning down...if you are on the streets and they can't find a viable target anyone will do. I watched the news and learned about an investigation involving a frozen dog corpse, a string of non violent house robberies in one of the beach cities (affluent) and even a doggie abuse case (WOW). All of these dead minorities killed within blocks of one another...NO COVERAGE. We had a plague of cooked cocaine wipe out an entire generation and cripple the next...I believed that the powers that be had decided to let this generation do itself in also...but I was in that neighborhood today and I must admit that the police are everywhere..up and down every block..we have to stop blaming the police (oh..they don't care...) and start taking responsibility for US!!!..Peace to the grieving fams left behind...Hopefully one day we will see the light...