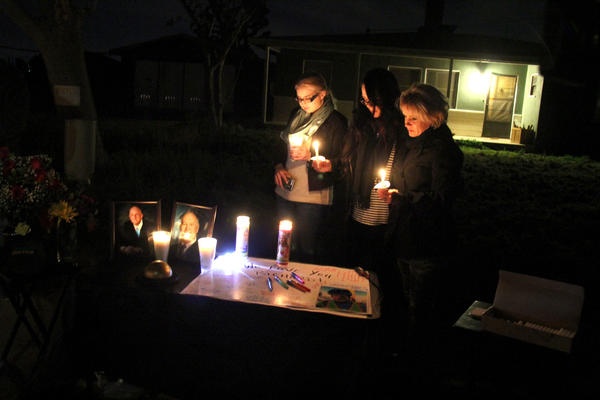 A car crash left Richard Gardner III with a limp and other disabilities, but it didn’t stop him from bicycling eight to 10 miles every day to wash windows and dispense his wacky humor.

About 50 people gathered outside his modest Palmdale home at 1154 W. Avenue N12 on Wednesday night to honor the man whose oft-stated goal was performing as a comedian on “America’s Got Talent” and winning the show’s coveted Golden Buzzer Award.

The small green house with chipped white trim is where deputies found Gardner’s body on Jan. 13 — his 53rd birthday — along with those of his bedridden father, Richard Gardner II, 78, and his father’s wife, Pepper Gardner, 56.

Los Angeles County sheriff’s investigators said the three were stabbed, suffocated and beaten to death by James “Todd” Brown, 53, who rented a trailer on the Gardners’ property. The younger Gardner’s small dog and his stepmother’s two dogs also were found beaten and dead inside the house.

On Wednesday, friends recalled Gardner’s jokes and pranks, such as the bottom half of a khaki-clad mannequin that was tied to a tree in the family’s front yard, with three mum bouquets sprouting from where the torso should be.

It was a memorial to the victims but also an endearing inside joke for family and friends, who recalled how Gardner liked to attach the partial mannequin to his bike and introduce him as “my half-brother.”

Maria Ochoa, owner of Tortilla Grill in Palmdale, remembered how Gardner encouraged her to keep trying during the difficult days when she first opened her now-thriving restaurant.

“Nothing was impossible for him,” Ochoa said. “He probably didn’t know how much of a difference he made in our lives, but the way he was made me want to be like him.”

Sarah Wilson used to cut Gardner’s hair and heard all his jokes. He carried a wooden replica of a T-bone steak, she said, and would pull it out when he asked, “How do you kill a vampire? With a wooden stake.”

Vigil organizers Marcela Nicol and Tamara Myers told stories about Gardner as they set out candles and photos. He made money washing windows for local businesses, Nicol said, “but he was not just a window washer — he was a beautiful person, one of the most beautiful people I’ve ever met.”

Gardner’s main purpose in life “was to make people smile,” Wilson said. “He always would make you smile. I can’t imagine who could do this to him.”

Gardner had been looking forward to a birthday dinner with his mother and sister, friends said, but when they came to pick him up at 4 p.m., no one answered the door. The women asked for help from deputies, who discovered the bodies when they forced their way inside.

Brown initially was identified as a “person of interest,” but investigators now think he is responsible for the killings and have gotten a warrant for his arrest, sheriff’s Lt. John Corina said.

Investigators think Brown killed the Gardners “over a dispute about money,” Corina said. Brown filed a disability claim with the state in 2012 and had been out of work, except for odd jobs, since then. The claim was recently denied, Corina said, “which might have added fuel to the fire.” 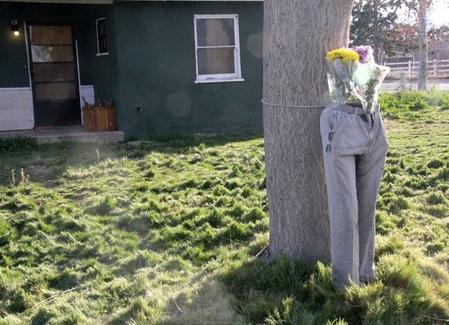 Brown has an explosive temper and past arrests for domestic violence and assault with a deadly weapon, Corina said. He lived alone with a German shepherd, which he apparently took with him, authorities said. He drives a silver Toyota pickup with a camper shell, California license 42198C1.

Investigators haven’t been able to contact Brown’s family in Antelope Valley or the Inland Empire, Corina said. They are asking for the public’s help in finding him.

“We need to get this very dangerous suspect off the streets,” he said.