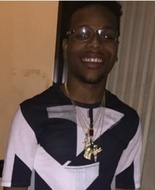 Richard James, a 23-year-old black man, died early Wednesday, Oct. 14, after he was shot in the 8400 block of Sunset Boulevard in West Hollywood, according to Los Angeles County coroner’s records.

James was standing with a group of people in the patio outside the Comedy Store when a black male wearing a hooded sweatshirt began shooting, said Los Angeles County Sheriff’s Department Lt. Steve Jauch.

Witnesses told KTLA-TV that at least six shots were fired. James was struck at least once in the upper torso and taken to a local hospital, where he was pronounced dead at 1:36 a.m., according to coroner’s records.

James was not a California resident, but Jauch said he couldn't say more about where James lived or why he was in Los Angeles out of fear that it could hurt the investigation.

Jauch said investigators have little information about the shooter. He was last seen running southbound on Olive Drive, a side street next to the club.

“We don’t know if he was part of the group before the shooting or if he had just walked up,” Jauch said. “We have not confirmed whether there was any conversation. We just have no answers right now about why the victim was shot, or whether he and the suspect knew each other.”

The Comedy Store had been hosting a Roast Battle on Tuesday night, and comedians were performing up until the shooting, The Times reported. No other injuries were reported.

Comedian Justin Martindale said he was judging one of the shows when he heard a sound like firecrackers.

“We kept the show going just because we weren’t sure what was going on,” he told The Times. “Then everyone started spilling into the upstairs room. Everyone was shaken up about it. It’s crazy, out of all places.”

This is the first homicide in West Hollywood since an officer-involved shooting in April of 2014.

The Comedy Store canceled its shows Wednesday , but resumed its regular schedule the next day.

City Councilman John Duran, a longtime Sunset Strip resident, said he was shocked when he heard about the shooting. “It’s very rare we have a homicide in the city,” he told The Times. “The city and West Hollywood sheriff’s station have made security on the Sunset Strip a priority for years because of the nightlife in the area," he said.

Anyone with information about the shooting is asked to contact the Sheriff’s Department Homicide Bureau at (323) 890-5500. Those wishing to remain anonymous should call Crime Stoppers at (800) 222-8477.

Do you have information to share about the life of Richard A. James ? The Homicide Report needs your help. Please fill out this form or e-mail us at homicidereport@latimes.com.

Share a memory or thought about Richard A. James

RIP to the big floxk! Forever twirling in your name

Yo Rich is my everything. I love him no homo he is my homie. I miss those times when we was singing and making those songs. Gone but no forgotton.
Justice for Rixh Flockz

He is my older brother. He will truly be missed and he was a very very good person.

hello Richard James and may you rest in peace,

I have no idea why you were killed and certainly far too young to die in a shooting incident. I had been looking at the Times homicide report because my daughter lives near by and I have been concerned that she lives in such a dangerous city.

There has been a lot of news about terrorism lately and people are scarred. Yet after doing some checks I find that more Americans are getting killed every year - not from terrorism - but from each other.

The US State Department has warned Americans to be careful travelling. YES and they should include LA and Chicago and New Orleans and a few US cities.

So farewell Richard James, our thoughts are with your family.