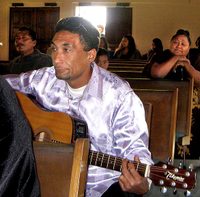 Long Beach: Roketi Su`e, a 46-year-old Samoan man, was shot and killed by police officers in the 3400 block of East 67th Street about 7 p.m. Saturday, May 17. He was taken to Long Beach Memorial Medical Center, where he was pronounced dead, police said.

According to a Long Beach police statement, officers responded to several calls from residents in the neighborhood about a man who was acting violently and erractically. When they arrived at the scene, officers saw Su`e and tried to arrest him, police said. The officers were then involved in a  "physical altercation" with Su`e, according to the statement. The officers used their batons to gain control of Su`e but were unable to.  Fearing for their lives, one of the officers shot Su`e multiple times in the torso, the statement said.

Shortly after the shooting, officers were confronted by at least 40 people. Additional units arrived to assist the officers, and police were able to take control of the situation, according to the statement. Police said the L.A. County coroner's office will determine whether Su'e was under the influence of drugs or alcohol.

Anyone with information about the incident can call Long Beach homicide detectives at (562) 570-7244.

Update: Members of the Samoan community of Long Beach gathered Tuesday to denounce the shooting of Su'e.

Mental health related police shootings are on the rise. If the person cannot physically harm the cop I dont think deadly force should be applied. We had a mental health patient in VA killed by a police officer outside of her workplace police feared for there lives and she had a plastic knife and was dilusional possibly off her medication. Shot her dead,she was diagnosed mental health patient.