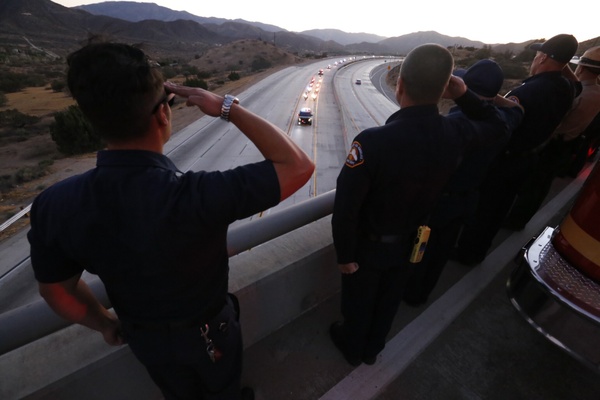 Owen, a 29-year department veteran, had responded to a seemingly routine burglary call at an apartment building around 12:35 p.m.

Maria Azuela, 33, had called deputies to her home after a loud noise drew her downstairs, where she spotted a broken glass door.

She ran back upstairs to her bedroom where she waited with her 7-month-old baby. Moments later, she heard gunshots. From her bedroom window, Azuela saw a man lying motionless on his stomach. It was Owen.

A deputy who was at the front of the building ran toward the sound of the gunfire and found the wounded sergeant.

The gunman, meanwhile, ran to the front of the building and jumped into Owen's patrol car.

The deputy returned from the back of the building and opened fire on the stolen cruiser. The gunman threw the car into reverse and rammed a second patrol car, which struck the deputy and injured him, authorities said.

After the collision, the gunman jumped ran into a nearby home where two teenagers were inside. One teen was able to send a text message to alert authorities, Capt. Steve Katz said.

Sheriff’s SWAT deputies entered the home and rescued the teens, who were unharmed.

The man fled through the back, where he hopped a wall into another backyard and was confronted by deputies from Lancaster station, according to a department news release.

Owen was taken by a patrol car to a nearby hospital, where he was pronounced dead at 2:44 p.m.

Trenton Trevon Lovell, a 27-year-old parolee from Lancaster with a long criminal history, was arrested on suspicion of murder. Lovell, who is black, was struck in the upper torso by gunfire at some point during the incident and taken to the hospital before being booked into jail, according to the release.

Shortly after Owen died, Sheriff Jim McDonnell issued a brief statement. “The tragedy of a deputy sheriff such as Sgt. Steve Owen making the ultimate sacrifice has a massive impact on the whole law enforcement family. We all mourn together and our hearts go out especially to Steve's immediate family, [his wife] Tania, a detective at Arson/Explosives Detail, his two adult sons Brandon and Chad, a step-daughter, Shannon, and his mother, Millie.”

At a news conference Thursday, McDonnell refused to speak Lovell's name, saying the gunman first wounded Owen and then stood over him and fired four additional rounds into the sergeant’s body.

The gunman was carrying a stolen weapon, McDonnell said, and after the shooting he allegedly searched Owen’s body for his handgun “with the intent to use it to murder” another deputy who was arriving to the scene.

“This was a calculated execution,” the sheriff said.

McDonnell said the department first came into contact with Lovell when he was selling marijuana as a juvenile. He was arrested 11 times, the sheriff said, including two occasions that resulted in state prison time.

The sheriff said it was time for a serious conversation about policies he blamed for allowing the gunman to cycle in and out of custody for years.

“Here was a guy -- a parolee who was classified as moderate risk,” McDonnell said. “Yesterday he was parolee walking our streets with a stolen gun. Today he is facing charges of murdering a peace officer.”

McDonnell spoke after an outpouring of praise for Owen in the Antelope Valley community.

On Wednesday, hundreds of people huddled near the entrance to the station to memorialize Owen as a lawman, a volunteer football coach and a community presence.

"Steve was just the most hands-on, motivated field sergeant that ever worked for me," said Lt. Derrick Alfred, who supervised Owen. "He was just a real hands-on street cop."

Owen’s presence was noted at community events, such as toy drives and PTA meetings, and he liked engaging with youth, said Darren Parker, former president of the L.A. County human relations commission and a civil rights activist.

Malhi said Owen was known for being calm in tough situations and was well-respected in the area.

Many mourners gathered Thursday at the Lancaster sheriff’s station to pay their respects to a sergeant whom one resident described as “one of the good ones.”

Just before 8 a.m., Bishop Vaughn stopped at the station to offer prayers.

His first encounter with Owen wasn’t ideal. It was about eight years ago, and the sergeant had arrested him.

"That's how long we've been together, partners," Vaughn said. "He brought me a long way."

Vaughn now stays at a mental health facility not far from the station. But he thinks often of Owen, who he said served as a mentor and a father figure.

"This guy, when I was in trouble, kept me straight," Vaughn said.

Randy Johnson Jr., 29, of Lancaster, sat on a bench outside the front doors of the station with tears in his eyes. Johnson said he met Owen about 13 years ago when he was a junior at Antelope Valley High School.

Owen pulled him over, searched him and found marijuana, Johnson said. The two chatted while Johnson was in the back of the police car.

"I kind of told him my life story and that I had no one," Johnson said. "He let me know he'd take care of me. He said he could take me to school every day and bring me lunch if I needed."

Over time, Johnson's one pair of shoes had holes worn in them and people at school made fun of him for it. He called Owen and asked for a new pair. The next day when Johnson got out of school, Owen was waiting with new Nikes.

"I'm only here because of him," said Johnson, who now has a wife and two kids and works at an auto body shop. "That man is super cop. He’d do anything for you, your community and your kids. A damn good man."

Johnson pointed to the row of candles, American flags, balloons and flowers piling up in front of the sheriff's station. "It speaks for itself," he said.

Do you have information to share about the life of Steven Craig Owen ? The Homicide Report needs your help. Please fill out this form or e-mail us at homicidereport@latimes.com.

Share a memory or thought about Steven Craig Owen