Two years later, mother is still knocking on doors to bring her son’s killer to justice 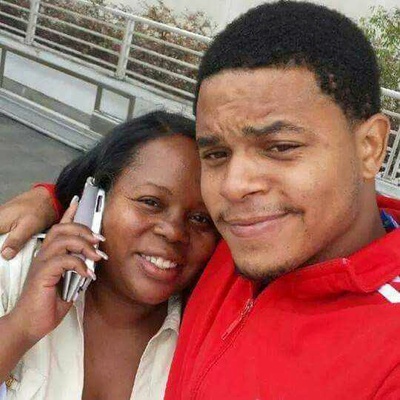 Techea Adams was working at home the morning her middle son, Kejon Atkins, blew her a kiss and stepped outside their Compton home to go running with a friend.

“I’d just answered a call from my office, at 11:20 a.m.,” she said. “I’m sitting there on the phone, and I hear all the gunshots. I hear all the helicopters; I watch them circle around, but I never once thought that was my child.”

Moments later, a young neighbor pounded on her door, saying he’d heard from another neighbor that Atkins, 22, had been shot.

“He said, ‘I tried calling his phone, and this man answered and told me to take my phone to his mother,’ ” she said, “so this boy ran down the street in his underwear to bring his phone to my house, and it was the hospital telling me to hurry up and get down there.”

Atkins, a student and football player at Long Beach Community College, had been shot in the head by a shirtless man in a champagne-colored sedan the morning of July 23, 2015. He held on for four days at the hospital before he was pronounced dead at 2:22 p.m. July 27.

On Friday, Los Angeles County Sheriff’s homicide investigators released surveillance footage of the two cars thought to be involved in Kejon’s shooting. They emphasized that the Los Angeles County Board of Supervisors has offered a $10,000 reward for information leading to the arrest and conviction the gunman.

The video shows two cars that appear to be involved in the shooting, a four-door sedan and a maroon-and-gray Pontiac Aztek SUV. The shooter, who had a tattoo on his back, was in the sedan, said Det. Theo Baljet, but the video shows both cars speeding away.

“They were both obviously driving at a higher-than-normal rate of speed, and they both blew a red light,” Baljet said. “We think they were related.”

Six months after Atkins died, his mother moved out of Compton. She and her brother were raised there, and she’d bought her own home on East 126th Street in 2002, the home where Atkins grew up. But after the shooting, Adams said she couldn’t concentrate in the house anymore. She kept having flashbacks to the day her son was shot, so she and her daughter, Jessica, moved to Santa Clarita.

Family and friends will be back in the old neighborhood on Sunday, July 23, though. Starting at 4 p.m., they’ll retrace the half-block that Atkins walked the morning he was shot, pray and pass out water and leaflets in the hope of getting someone to come forward with information about his killer.

Adams named the march “Take a Walk in My Shoes Before You Judge Me” because she wants to dispel myths about her hometown.

Atkins “wasn’t perfect,” she said, “but he wasn’t bad, and he wasn’t in a gang. He loved football, he loved to travel and he always smiled. That’s what people remembered him by.”

He lived at home, Adams said, and did what he could for his mother and sister, who was 9 when he died.

“He was my helper,” Adams said. “When I got divorced and he started driving, I only had one car, so on my lunch break, I’d get him from school, we’d go to lunch and then he’d have the car. After football practice, he’d pick up his sister from school, go to the park for ice cream and then pick me up at work.”

When he was in college, Atkins made sure his sister got to her gymnastics class at the Lakewood YMCA. “One day, she said, ‘Everybody’s daddy shows up to gymnastics, and I never have anybody show up,’ so after football, he started showing up at the gymnastics place, just so she would have a guy there.”

Adams said she hopes she can increase the reward amount to draw more interest in her son’s case. And she’s determined that people won’t forget about him or his death.

Her short march will start at 1705 E. 126th St. on Sunday, their old address, and head up 126th toward Wilmington Avenue. Atkins was shot outside Cesar Chavez Continuation School, across the street from the Nehemiah Missionary Baptist Church. Summer school was just getting out, so the area was thick with traffic, Adams said.

“I just hope somebody comes forward, whether it’s a girlfriend or a family member. Everybody who knows and doesn’t say anything is just as guilty as the person who pulled the trigger,” she said.

“Most of all, I wish that we as African American and brown people would open our eyes and look at what we’re doing to each other. We’re killing each other. It’s sad, and us parents have to step up.”

Photo: Top, Techea Adams and son Kejon Atkins take a photo at LAX a few months before he was shot near their Compton home.

I love and miss you Kejon. I will continue to seek Justice for you