Man sentenced to life without parole in Chinatown murders 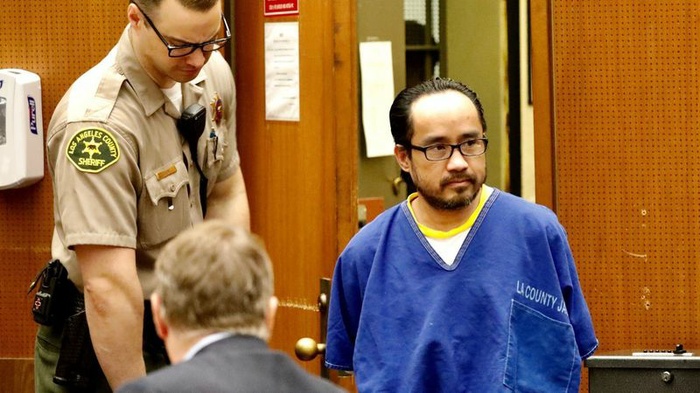 A 39-year-old man was sentenced to life in prison without the possibility of parole Thursday in the fatal stabbings of two men at a Chinatown social club in 2017.

Vinh Dao, wearing a blue L.A. County jail uniform with his wrists cuffed behind his back, showed no expression as Superior Court Judge Robert J. Perry announced the sentence.

No one spoke on behalf of the victims, Kim Kong Yun and Joe Hoe “Tony” Young, both 64.

Outside the courtroom after the sentencing, Dao’s public defender declined to comment.

A jury deliberated for just an hour and a half last month before convicting Dao of two counts of first-degree murder with special circumstances. Prosecutors decided not to pursue the death penalty.

The slayings occurred at a Chinatown social club popular among older Chinese immigrants. Dao showed up there in January 2017 and disrupted a mah-jongg game.

Authorities have said that Dao demanded $400 to retrieve his impounded vehicle. He was apparently upset with the club, which often gives immigrants money for emergency financial issues, because he felt they hadn’t given him enough to get his car back.

Dao began arguing with Yun before stabbing him to death. He then stabbed Young, who had come to the other man’s aid.

Dao had been a member of the club several years earlier and was acquainted with some of the people present at the time of the crime, according to the Los Angeles County district attorney’s office. He was arrested the next day.

The FBI had pursued Young for years, convinced that he was a leader of the notorious Wah Ching gang, implicated in an armed robbery and at least two homicides.But Dao’s motive for stabbing Young, authorities say, had nothing to do with Young’s past.