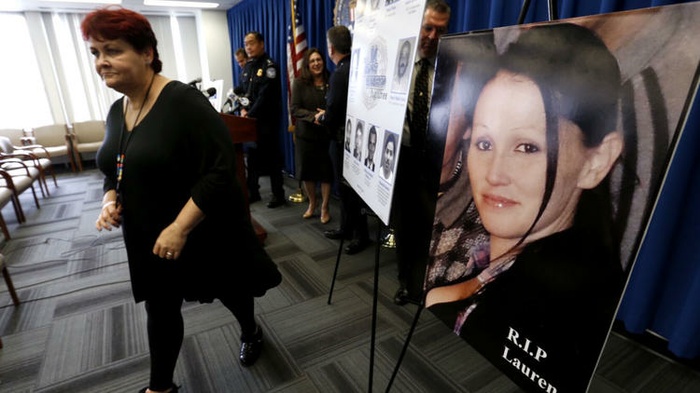 By James Queally and Veronica Rocha

A man wanted in the fatal shooting of his pregnant girlfriend in Los Angeles in April was arrested Sunday after he became lost and mistakenly drove to the San Ysidro border crossing with a woman he recently met at a strip club, authorities said.

Philip Patrick Policarpio, 39, was added to the FBI’s Ten Most Wanted list in May after he was charged with murder in the shooting death of his girlfriend in East Hollywood.

Policarpio told border agents he was a Mexican citizen who had made a wrong turn when he was stopped at the San Ysidro crossing about 4:45 p.m., according to a news release issued by the U.S. Customs and Border Protection Agency. He was carrying several pieces of identification and told border agents he “intended not to return to the U.S.,” according to Dierdre Fike, special agent in charge of the FBI’s Los Angeles office.

“He was very vague in regards to providing information,” Aki said at a morning news conference to discuss the arrest. “That of course sets off red flags among us.”

After scanning his fingerprints, the agents noticed a warrant had been issued for Policarpio’s arrest in connection with a Los Angeles homicide. Fike said he tried to flee but was captured quickly.

Policarpio was traveling with a 22-year-old Mexican woman who he had recently met at a strip club, according to Fike. She was released and allowed to return to Mexico after agents determined she did not have a legal right to enter the U.S., according to the release.

Policarpio initially was detained Sunday on a federal warrant accusing him of fleeing prosecution, though the FBI expects to drop that charge so he can be immediately prosecuted on murder charges in the deaths of his girlfriend and her unborn child.

Policarpio is accused of killing 32-year-old Lauren Elaine Olguin during an April 12 gathering in East Hollywood, according to a criminal complaint filed in federal court.

After bursting into a room where Olguin was playing cards, Policarpio became angry and struck his girlfriend several times before shooting her in the forehead, court records show.

Police recently said they believed Policarpio might have fled to Las Vegas after the shooting, but he hadn’t been seen until Sunday, authorities said.

Evidence gathered Sunday indicated Policarpio had been living in the Tijuana area in recent weeks, the FBI said.

At the time of the April killing, Policarpio was on parole stemming from a 2001 assault conviction, the FBI said. In that case, authorities said, Policarpio fired several rounds at an occupied vehicle in Burbank in June 2000, seriously injuring a man and a woman.

He fled to the Philippines later that year, but was deported back to the U.S. after he was arrested there. Policarpio served 14 years in prison in the assault case and was released in May 2015.

Jerilyn Olguin, the victim’s mother, said she was surprised when a police officer called her on Sunday to let her know Policarpio had been captured.

“I was very relieved,” she said. “I was very worried he was going to hurt somebody else.”

Photo: Gerilyn Olguin, mother of Lauren Olguin, walks past her daughter's photo at the conclusion of a news conference at the FBI Los Angeles field office regarding Sunday's arrest of fugitive Philip Patrick Policarpio, who was charged with murder in her shooting death. Credit: Al Seib, Los Angeles Times