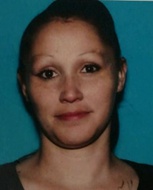 About 6 a.m., officers responded to a call of a gunshot victim, according to a news release from the Los Angeles Police Department.

Olguin was playing cards at a gathering when, according to a posting by the FBI, Philip Policarpio, a 39-year-old Filipino, approached her, began to beat her and shot her during an argument.

Olguin, who was pregnant at the time, was pronounced dead at the scene.

Policarpio, who fled the scene, is on parole for a 2001 conviction for attempted murder, according to authorities.

Policarpio is about 5 foot 8 and weighs about 180 pounds. He has a tattoo on his chest that reads, “Only God Can Judge Me,” and is known to wear glasses. 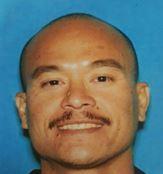 Policarpio drives a red four-door BMW 325i with the license plate number of 7NBY245.

Police believe Policarpio used a revolver in the killing. He is considered armed and dangerous.

Note: A previous version of this report misspelled Olguin's middle name as Elaina based on preliminary information from the coroner's office.

Share a memory or thought about Lauren Elaine Olguin

This is such a sad tragedy and my heart is breaking. I became close with Lauren when she was placed with my mother. I took her to rainforests cafe for her 16th birthday, prom shopping at 17. She said she felt like Cinderella all pretty n pink. She was very Intelligent, funny and lovable she deserved a better ending not this tramtic tragedy. You are loved and will never be forgotten Lauren my heart is heavy. I hope my mother finds you n keeps you close. My prayers for your daughter.

I hate reading these types of stories, makes me feel sad for the victim and their family. My sincere sympathies to those who were close to her. I did not know her, but this story really inpires me to get more involved with women in abusive relationships. I think all women need to come together, and stand against these coward men who think it is okay to hit a woman. Let alone shoot her. May she rest in peace, and I am glad they this monster was found.

You were so pretty Lauren. So funny. You made everybody laugh. You were tough but you were vulnerable too. I met you when you were 18. I hadn't seen you in about 5 years. But the last time I did see you was when you came over to my house with boloy. You were very smart but society had allowed you to slip through the cracks. California owed us all a lot more positive attention than it ever gave us. We were its future once, but it never thought to encourage us to succeed. In spite of all this you kept on surviving. You were a survivor. I am sorry you are gone too soon.

I'm in so much disbelief right now my heart is pounding. I'm glad she has the peace she was never able to find here on earth. I will always love you the rest of my life and think of you often. I still remember the day we me . We did what we could. We love you Lauren ...This is so surreal.

The victim in this case is my only daughter. I pray that anyone with the smallest amount of information comes forward. Remember "there but for the grace of God go i" this could have been your child. Policarpio is a father of two but still didn't have enough sympathy in his heart to remember what this would do to those who loved Lauren. I will do whatever it takes to see this horrible man brought to justice and i will be in court to see him convicted.

I still can not believe that your gone. I remember Charlie calling me early that morning crying. He said you've been shot in the head and that your dead. At that instant I found myself unable to stop crying. We had our differences but i know the struggles you were forced to deal with on a day to day basis. All these memories started flooding my mind. I remember the girl who loves to be around filipinos that she even got our own flag tattoo'd on her back. Who just want to be accepted around the homies. Never harmed anyone. Then i remembered someone has to tell your parents/family what happened to you. It was so hard to break the news to Gerard. But i had to. It was more hard to speak to your mom and tell her that im so sorry but your only daughter is gone. I can only imagine the hurt and pain she felt. Im sorry you were taken away so quickly. I'd miss our little card games. Our little girl talk about BS lol. I promised your mom that i will help them anyway i can. I know your in a better place now. No more crying, no more hurt and pain. Now you'll be up there watching over us. Shaking your head as you laugh and watch what craziness were getting ourselves into. Lauren justice will be serve i promise. You will never be forgotten. Thanks for the laughter and the drama. Its a pleasure meeting you. Rest in peace Lauren Olguin. Sleep with the angels.

I remember as if it was only yesterday, meeting each other. I was only 19 years old. Now in our thirties, how time flies. Like a movie of our young years playing in my mind. How horrid it must have been for you. As my friend explained the last gruesome details of your death. I sat there next to him, next to your mother wanting to just give them hugs, cause there is no words that can describe the pain of losing you is like. It must have been horrid the last moments you had before he took you from us, a mother from her children, the one and only daughter from your mother,and only sister. I cry for you, i cry for the 3 mth old baby that you carried inside you. Good bye my dearest friend...