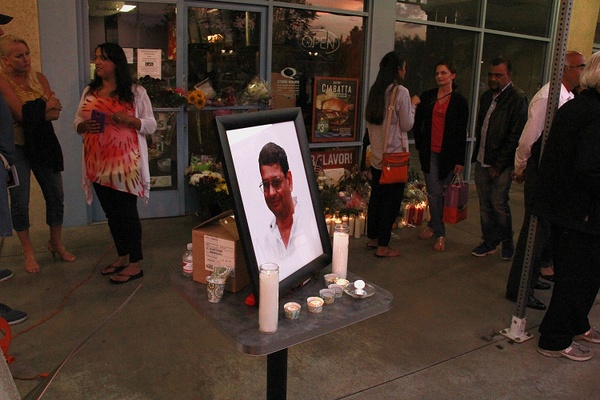 "It felt like a message from Pravin," said his niece, Lena Patel, one of 50 or so family members who joined the vigil and then stayed after to talk.

Flowers, candles and a large photo of Pravin Patel, 62, were placed outside the Quiznos restaurant where he was shot and killed by a robber on June 2. Extended family, including six siblings, came from as far away as England and India to be with his wife, Maya, and adult children Nilesh and Sheena.

Friends and family spoke about Patel's kindness and generosity. Customers recounted how Patel and his wife, Maya, always remembered their names and asked about their families. His long-time neighbor, a Christian pastor, stood up to say Patel, a Hindu, was the embodiment of a good neighbor. Mayor Curt Morris offered the city’s support.

The Los Angeles Board of Supervisors has offered a $20,000 reward for information leading to the arrest and conviction of the killer. Reward posters with a composite sketch of the suspect were distributed widely this week and posted on business windows around the area.

For the family, however, the overriding message of the vigil was the need to arrest and convict the killer, said Risha Patel, one of the victim's nieces. 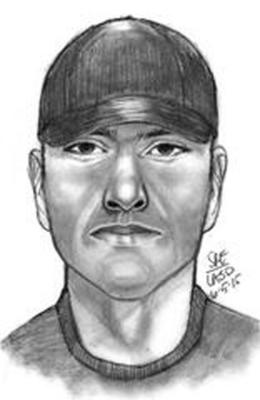 “We want this individual brought to justice,” she said. “We’d like people to look at the composite sketch, and we hope the $20,000 reward will help get some answers. Somebody, somewhere, knows something…."

Risha wondered why someone would rob a Quiznos in a small community like San Dimas. She looked at her cousin Lena, and they both shook their heads.

“He stole about $190. That’s all, and now my uncle is dead. We won’t give him power over our lives. We will keep my uncle’s memory alive and we will embrace the positive, by living our lives to the fullest with the people we love….”

“And we won’t live with regret,” her cousin Lena added, “like the individual who did this is undoubtedly living and feeling.”

Patel was killed about 3:20 p.m. on June 2. Authorities are looking for a tall, skinny white man or Latino in his 20s who entered the restaurant, pulled a gun and demanded money.  He threatened to hurt the two customers in the store if Patel didn't comply, Los Angeles Sheriff’s Department investigators said.

Patel turned over the money in his cash register, and then followed the robber outside. The two men tussled in front of the store, then the robber shot Patel once in the abdomen and fled.

Patel died at a hospital later that evening. 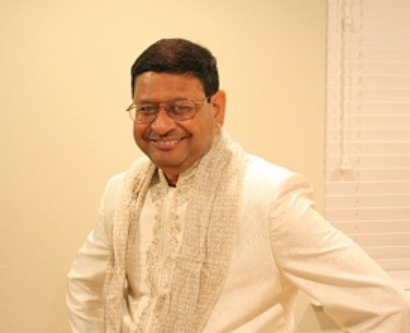 Homicides are rare in the prosperous bedroom community of San Dimas, on the eastern edge of Los Angeles County between the 10 and 210 freeways. The last fatal shooting was in 2009, and the city has had only six homicides since 2000, according to coroner's records.

They set up a business first in San Diego, then moved to San Dimas in 1990. They owned a video rental store at Arrow Highway and Sunflower called Discount Video until they opened the Quiznos on Dec. 31, 2004.

The Patels ran the sandwich shop themselves and with such skill that the corporate office used their restaurant to train new franchise owners, said Elizabeth Sapp, a spokeswoman for the restaurant chain. The corporation has pledged to match up to $5,000 in contributions to the Pravin Patel Memorial Fund.

The restaurant has been closed since Patel’s shooting. Risha Patel said her aunt hasn’t decided if she will reopen, “but we will support whatever she decides.”

Photos: (Top) Friends and family stayed to talk after the vigil outside Patel's Quiznos restaurant in San Dimas June 12. Credit: Jeanette Marantos/for The Times Middle: Police sketch of alleged shooter (Bottom) Pravin "Peter" Patel dressed for his daughter's wedding in a photo supplied by his family.