At funeral for teenager shot over red shoes, grief and denouncements of gang violence 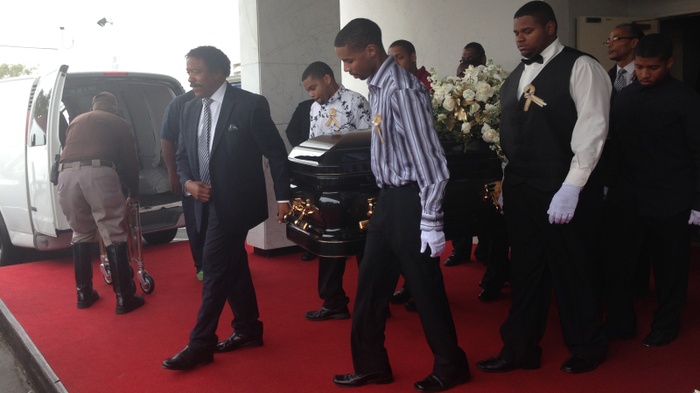 Jennifer Rivers hobbled behind her son’s black casket as the pallbearers carried it to the front of the chapel Saturday morning. Family members rushed to console the grieving mother, dressed in white, as she took her seat. Rivers gave a cry and gripped the closest hands to her face as the casket was opened.

Only weeks earlier, her son, Tavin Price, 19, was with her at a carwash in Hyde Park. Now, he is dead -- shot by a man who demanded her son's red Chuck Taylor shoes. At the church, the congregation sat in silence as Rivers cried out.

Price’s brother, James, slumped over the back of the pew, tears trailing toward the floor. His body lurched with each sob. He never looked at the open casket.

“Why?” Rivers screamed. “Why did they have to take my baby?”

More than 200 people attended the service at Angelus Funeral Home in the Baldwin Hills/Crenshaw neighborhood, filling every pew and standing along the walls. Several family members held a single white rose. Gold and white ribbons adorned lapels and blouses. Inscribed on the ribbons were two dates: Price’s birthday and his final day of life.

Price was born June 1, 1995, to Rivers and James Walter Price Sr. At age 3, Price was struck by a car. He sustained a brain injury, and the doctors said he would not be able to walk, according to his obituary. He recovered his ability to walk but had some mental disabilities. Price attended Crenshaw High School and later finished his education at Los Angeles High School.

Police are still looking for the gunman who confronted Price about his shoes on May 29. The man demanded that Price take his shoes off, and when Price didn't comply, the man opened fire. Rivers recalls her son crying out to her: “Mommy, I don’t wanna die.”  Price was rushed to a hospital where he died in surgery. 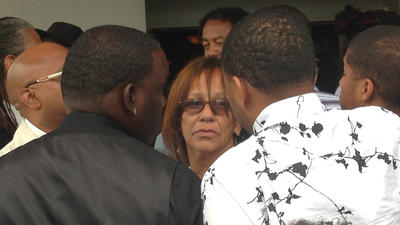 “Tavin had so much to live for,” Sabrina Johnson, who led the service, said. “For a man who had already achieved so much, he was taken too soon.”

Several family members and friends also spoke about Price's death. Pastor Francelia James had a response to a common phrase uttered to victims of gang violence. "Talking about 'Where you from?' Your mama's womb," James said. "We belong to our mamas. They gave us life. Not these streets."

Community activists also spoke out against violence. Amir Abdul-Jalil, a gang interventionist, called for an end to black-on-black violence and reflected on its effects.

Representatives of Los Angeles City Councilman Curren Price and state Assemblyman Mike Gipson were at the service to show support for the family. Gipson's spokeswoman said both houses of the Legislature would adjourn in memory of Price on Thursday.

Rivers clutched family members throughout the service. She prepared a few words, but her niece, Ceritha Daily, delivered them. In the remarks, Rivers recalled Price’s last birthday -- and how tight he held his mother that day.

“I miss you, Tavin. You were my world. Loving you always, Mommy.”

They say that “Black Lives Matter”. Actually, the value of black life fluctuates like real estate. It all depends on who is doing the killing—as my son’s murder from October 30, 2014 is still unsolved. Unfortunately, when a black life is taken by another ‘brother’, the family is just out of luck. Please feel to view and share our video against gang violence. By the way, since we’re not the givers of life, we don’t have the right to take it away. “All Lives Matter”!

To all the gang-bangers, I"d like to know in your short life span what have you gained from the streets? I'll tell you what....Murder, death, darkness, poverty, jail, and a ticket to hell , not this so called paradise you speak of. You don't own the rights to give and take a life, so you will give an account for your murderous acts and all the homies male and female who condone and aide and abet these acts. I feel sorry for you because many of you come from a generation of this, starting from your grannies, daddies (some in the pen, or dead) your Mommas, her brothers, cousins, sisters and so forth. You leave a legacy for your children to be a blood or a crip. Cycle is maddening. You gotta problem with your own and you in turn question a white police officer as to why he profiles? You profile each other and sometimes without any dialogue have cut a life short for nothing. The Blood on your hands is a stain that can only be washed through the blood of Jesus. Until you fall to your knees and confess your sins Lord have mercy. Some of you spend time in church on Sunday, sorry that's not enough, FYI, God don't need you. The praying hands or scriptures tattooed on your body, the God you speak of oh so recklessly, the rest in paradise for your dead homies ain't gonna work on Judgement day.

I hope that the gang banger who took this kids life reads this article so then he can feel real good about himself! shooting a disabled kid, what a big man

I never imagined that a person can be killed for his shoes in USA.Rest in peace brother .
Abie from South Africa