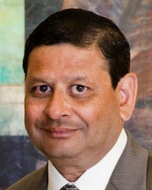 Patel was shot after being robbed at gunpoint in his Quiznos restaurant, according to a news release from the Los Angeles County Sheriff's Department.

The assailant entered the business about 3:20 p.m., showed a handgun and demanded money. Patel gave the suspect the money in his cash register and then followed the suspect when he ran outside, according to the news release.

The two men got into a fight in the parking lot, investigators said, and the suspect shot Patel once in the abdomen. He then fled from the scene on foot.

Patel was taken to a nearby hospital, where he was pronounced dead at 10:37 p.m., according to coroner's records.

The suspect is described as a tall and skinny white man or Latino in his mid 20s. He was wearing a baseball hat, black T-shirt and plaid shorts.

Anyone with information is asked to contact the Los Angeles County Sheriff's Department's Homicide Bureau at (323) 890-5500. Those wishing to remain anonymous should call Crime Stoppers at (800) 222-TIPS (8477).

FOR THE RECORD: A previous version of this post identified Patel as Middle Eastern. Sheriff’s Lt. Dave Coleman said Patel was East Indian.

Do you have information to share about the life of Pravin Raojibhai "Peter" Patel ? The Homicide Report needs your help. Please fill out this form or e-mail us at homicidereport@latimes.com.

Share a memory or thought about Pravin Raojibhai "Peter" Patel

I'm surprised that the victim is described as a Middle-Eastern man; the last name "Patel" seems to be of Indian origin.