Three men charged with murder in the shooting death of a 1-year-old girl in Compton last year pleaded not guilty this month, according to the Los Angeles County district attorney's office.

The announcement of charges came more than a year and a half after Autumn Johnson, who had just celebrated her first birthday, was shot in her crib in the 300 block of North Holly Avenue. 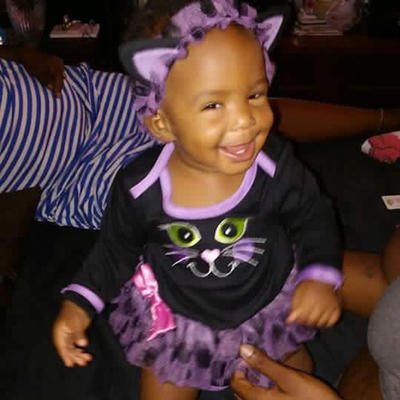 Douglas has been charged with one count of murder, one count of attempted murder and possession of a firearm by a felon, according to prosecutors. He also faces an allegation that he discharged a firearm that caused great bodily injury.

Hull has been charged with one count of murder, shooting at an occupied motor vehicle and possession of a firearm by a felon, prosecutors said. Hull also faces two counts of attempted murder.

A third defendant, Ronzay Richards, 24, pleaded not guilty Oct. 5. Richards faces one count of murder and one count of a attempted murder.

Ray Patterson, 24, who has been charged with one count of being an accessory after the fact, is incarcerated in Nevada on an unrelated case, prosecutors said. It's unknown when he will appear in court. Patterson was arrested on suspicion of murder last year but then released.

All of the defendants face allegations that their crimes were committed for the benefit of, and in association with a street gang. Hull also faces an attempted murder charge in connection with an incident in which, authorities said, he shot at a man sitting in his vehicle in Lynwood less than two months after Autumn Johnson was killed.

The Autumn Johnson case made national headlines last year as the city of Compton struggled to combat gang violence.

Wandick said he still lives in the neighborhood, which has quieted considerably since Autumn was slain.

“That touched everybody,” he said. “She was innocent. She had nothing to do at all with any of this stuff.”

Originally, authorities said the gunman was aiming for Autumn’s father, but L.A. County Sheriff's Lt. John Corina said the gunman appeared to be targeting another man who was standing in front of the residence.

Corina said the suspects are all from a rival gang’s neighborhood. Cracking the case took “a lot of hard work and a little bit of luck,” Corina said.

“Gang cases are hard to solve,” he said. “A lot of people don’t want to get involved or say anything.”

That night, about 7 p.m., Autumn’s mother, Blanche Wandick, was preparing her daughter a bottle.

Autumn was standing in her crib when she was shot in the head.

Sheriff’s officials said at the time that a gunman got out of a blue Chevrolet Impala, walked toward the home and fired toward the garage.

The gunman then got back into the car, which was seen heading south on North Holly Avenue.

Deputies who responded to the shooting took Autumn to the hospital themselves rather than wait for paramedics; her father rode in the backseat with her.

Autumn, described by a family member as “the center of attention and joy,” had only recently learned to walk.

A tiny baby at birth, she was called “Minnie” by family. She had just celebrated her first birthday with cake — with yellow and pink frosting — and Minnie Mouse balloons.

“Her smile would make you feel so good inside,” Marques Slaughter, the child’s uncle, previously told The Times.

After the killing, officials announced a $75,000 reward for information leading to the suspect or suspects.

Corina said that it was not the reward but detective and police work that led to the arrest.

Authorities had to track people down and get them to talk, he said.

Blanche Wandick was pregnant when Autumn was killed. Her son is now 18 months old, her father said.

No parents should Have to experience this. I'm sorry.

If this is what NFL players were kneeling for I would be their biggest booster.