Autumn Johnson, the Compton girl who was shot and killed in her crib, is laid to rest 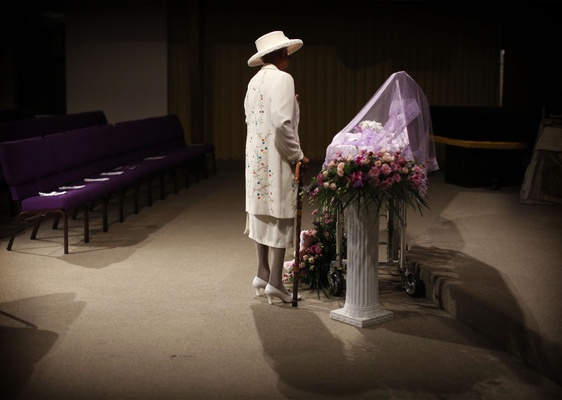 Before the Saturday morning service, mourners slowly made their way up to the small lavender casket inside Judson Baptist Church in Carson.

There lay 1-year-old Autumn Johnson in a purple ruffled dress, white shoes and a pearl necklace. As tearful men and women walked away, some shook their heads in disbelief. Autumn was killed Feb. 9 when a bullet struck her as she lay in her crib at her family’s home in Compton that had been targeted by gunmen. The assailants remain at large.

A woman held onto the child’s casket and cried, “Why did she go?”

The child’s father, Darrell Johnson, lifted up the purple lace and touched his daughter one last time. Before the casket was closed, a pink teddy bear was placed inside.

Then the service began.

“Autumn was a beautiful child,” her grandfather Jeffery Wandick told the crowd. “I just hope this starts something and is not just the end of a life. It doesn’t need to happen to anyone else.”

Throughout the service, Autumn was remembered as a gregarious child who had just begun to walk. She loved food, family said, and liked greeting people with, “Hey!”

In a slideshow, she was shown wearing purple cat ears. A photo of her birthday cake — yellow with pink frosting — flashed across the screen. Then there was a video of Autumn on a table, playing with a bottle, and Autumn in her father’s arms, waving.

Even the dancers were crying. One ran from the room.

“Autumn’s life mattered,” Hahn said through tears. She said her heart “broke into a million pieces” when she saw Autumn in the casket. 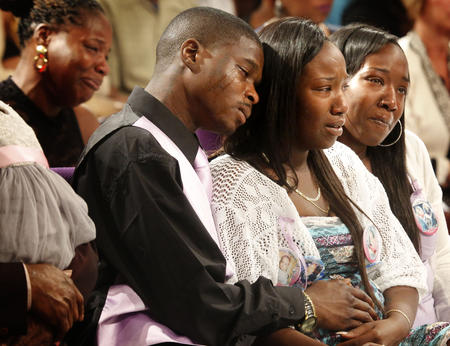 “For anything we didn’t do, we apologize,” she said. “Darrell and Blanche, I just want you to know ... my heart is broken.”

The child’s mother, Blanche Wandick, who was preparing a bottle for her daughter when Autumn was shot, stood at the podium. With Johnson by her side, she said the baby “changed her life.”

“The first time I held her, she smiled at me,” she said. She shared memories of their time together.

“I miss my baby,” she said. “It’s just so hard. I feel like my life is over. I wish it would have been me instead of her. She was my future, my firstborn.”

Kenyia Hicks told mourners that the child’s “short life had so much purpose.”

She said her nephew, Johnson, has been criticized by the public, but said he’s a good man and father. Authorities said Johnson is a gang member who could have been the target, but are still investigating the motive.

“You’re a good father, and don’t let anyone take that away from you,” she said.

Outside, Jeffery Wandick reiterated that Autumn cannot be a prop.

“There’s too much of this going on,” he said. “Those that can be saved need to be saved right now.”

For his family, he said, getting to this point, has been a struggle.

Moments later, the casket was placed inside a black hearse. Blanche Wandick leaned in and gave her baby a goodbye kiss.

Lord bless this family! To lose a child is the loss of what could have been. Death in general is difficult but there are some factors that render you breathless, and that's the death of an innocent child. So sorry for the loss!

@ Rosa Contreras. Lady, you have no idea what the community is doing and going through with this tragedy. You soon forget that anything positive is never televised and that by design. So I take great resentment of your comments, as you ASSume what this community is and or not doing. Do you really think that anyone support such a thing? Do you in your community support it? When I open this page, I see just as many Latinos as I do Black Men murdered. Where is your equal outrage for your community and or one which you may have abandoned convincing yourself that you have arrived. Try thinking before speaking on things you yourself are not doing.
Thank You Very Much.

My condolences to her family and friends.I know nothing can ease your pain at this time, Please hold on to each other and know ,that Gods knows your pain and Autumns' life meant something to us all. God will avenge.her.

To the family, Im sorry for your loss.
Hope the killer is located.

I find it disheartening there is no public outrage over this murder. No BLM protests, community activists denouncing gang warfare, Hillary, Bernie, or The President mentioning this outrage. Instead of the Times putting this on the front page about a baby killer on the loose, I see some one sided subjective article about police shooting..another anti-law enforcement article. Shame on you L A Times.

So sad for this precious child to have to lose her life like that before it even began. What kind of cowardly bastard shoots up a house with a mom and her baby inside? That was God's child you fake gangsters murdered. My heart really goes out to and hurts for the mom, dad, siblings and extended family.

This violence needs to stop.... This is too much.