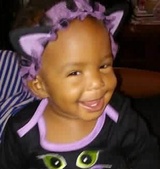 Autumn Johnson, a 1-year-old girl, was shot and killed Tuesday, Feb. 9, in the 300 block of North Holly Avenue in Compton, according to authorities.

Shortly before 7 p.m., the child’s mother, Blanche Wandick, was preparing her child a bottle when she heard gunshots. The child was standing in her crib when she was shot in the head.

Behind her, blood dotted the driveway leading to the yellow garage where Wandick lives with Autumn's father.

Sheriff’s officials said that a gunman got out of a blue Chevrolet Impala, walked toward the home and fired at the garage. The gunman then got back into the car, which was seen heading south on North Holly Avenue.

Authorities are searching for two black men and are looking for witnesses, even if they choose to remain anonymous.

“We’ll take whatever we can get,” Det. Todd Anderson told the Los Angeles Times.

Investigators are trying to determine what prompted the violence and whether it was related to a gang dispute. They believe Autumn’s father, Darrell Johnson, may have been the target of the attack.

Authorities said that Johnson heard the gunfire and ran to the garage. Inside, he found the baby and Wandick, who was hysterical.

Miguel Contreras said he was home Tuesday night and heard about four shots fired, followed by five more. He and his wife, along with their three children, threw themselves to the ground.

Contreras stepped outside when he heard screaming. He saw Johnson cradling his daughter.

“The baby was full of blood and its head was dangling from his arms,” Contreras said. “He kept saying, 'My baby, my baby.' Everyone started calling the police. It seemed like the whole world was calling 911.”

Deputies took Autumn to St. Francis Medical Center in Lynwood, where she was pronounced dead.

Autumn had been a tiny baby, under 5 pounds at birth, family members said, earning her the nickname “Minnie.”

She had just begun to talk and her sweet disposition came with a stubborn streak. She would walk for everyone except her parents.

She was “the center of attention and joy,” said her uncle, Marques Slaughter, 28. “Her smile would make you feel so good inside.”

Do you have information to share about the life of Autumn Marie Johnson ? The Homicide Report needs your help. Please fill out this form or e-mail us at homicidereport@latimes.com.

Share a memory or thought about Autumn Marie Johnson

This beautiful Angel remains alive in my heart all day everyday. I have no hatred for those that did this, Just sorrow and shame. Rest in peace my little darling.

Has the mother applied for victim of crime. They gave me a good $2000 to move for being a crime victim and no one was killed but I know they qualify. Everyone in the house can apply

On behalf of my grand baby Autumn Marie Johnson. I would like to thank everyone for your prayers. Autumns parents are soon to have Autumn's baby brother, Brandyn. During the course of Autumn Marie's death everyone made promised to help the parents with the new baby, housing and anything else they needed, that was all a lie. Out side of the various agencies that took care of the burial services including the go fund me account, no one has come by to even see how the parents are doing. They are homeless, totally confused, broke and depressed. No one is helping and no one really cares.
Autumn mom, Blanche Wandick has opened an account with Wells Fargo. routing # 122000247 checking account # 9027690941 if you want to help.

I don't even know this family and I am over here crying this is so sad i hope they find those cowards a 1 year old? Why??? Why??? smfh

I live in Scotland and I'm reading this story and looking at Autumn's photo and I'm in tears I can't imagine the pain her parents feel having their baby taken from them..or having to bury their baby..there is so much pain in this life, but her parents need to be there for each other, because it will heal, but their little beautiful baby will never be forgotten, sending my love and prayers to the family... Jacq

Please let me know if I can help in getting money for the family. I think i can raise some. My heart breaks for this family. I have kids and I know the pain. Thank You.

No parent should ever have to endure that kind of pain. Don't let anyone tell you when to move on. Try and stay grounded. You have got this. Stay strong. You need to live. Take care of yourself. This isn't okay, I feel terrible for you. I hope you find peace.... and Justice.
Love,
Buzzy

My condolence goes out to the family. Shaking my head n disbelief, no parent should ever have to experience a horrific death of a child.

I am so deeply sorry about your loss. Have faith that while your baby will never return to you here on earth you still have an opportunity to return to her in heaven. Read 2 Samuel 2:23