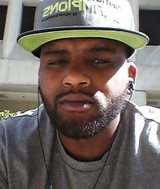 Boston Keith Farley, a 23-year-old black man, was shot and killed Sunday, May 15, near South Wilmington Avenue and West Caldwell Street in Compton, according to Los Angeles County coroner’s records.

Shortly before 9 p.m., Farley and two others were in a car that was pulling out of a gas station parking lot when a male who was waiting on the sidewalk opened fire, according to a news release from the Los Angeles County Sheriff’s Department.

The gunman then got into a white pickup truck and drove away.

Responding deputies found three people, two with gunshot wounds. Richard Williams, a 24-year-old man, was found in the vehicle. He died at the scene. Farley was taken to a hospital, where he was pronounced dead at 9:22 p.m., according to coroner’s records. A third person was not injured.

Alaricka Hayes said Farley, her younger brother, was born and raised in Compton and was outgoing and caring. Farley recently got a job working in a warehouse and wanted to go back to school to become a barber, she said.

Farley had a 1-year-old son, and loved playing with his 8-year-old nephew. His family has set up a GoFundMe page to help cover funeral expenses.

Farley was one of four people killed in Compton that weekend.

Share a memory or thought about Boston Keith Farley

I love you cousin ! It breaks my heart to know your not here this tax season I took you to pick up your check last year. I'm so sad to know im not going to be able to take you this year. Family misses you so much and I'm gone be strong for you. Watch over us all until we meet again love you bro always Robert !

People who kills for no reason need to be shot by a firing squad I lost my brother in a similar way I have no sympathy for heartless people like that.

Boston was one of the good men in the world . I never met someone that was so loving and caring but stubborn as t the same time I was blessed and honored to say he was and always will be the love of my life Boston I carry u in my heart and my soul forever rest in peace always with me