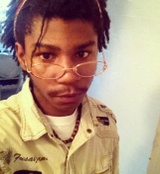 Branden Marcel Davis, a 21-year-old black man, was shot and killed Monday, Aug. 1, in the 500 block of North Sloan Avenue in Compton, according to Los Angeles County coroner's records.

Deputies found Davis lying in his driveway with multiple gunshot wounds, said Lt. Steve Jauch. He was taken to a nearby hospital where he was pronounced dead at 11:10 p.m., according to coroner's records.

Investigators learned that a man confronted Davis in his frontyard and fired several shots at him, Jauch said.

"We have no suspect description other than he was a male," Jauch said.

Investigators don't have a motive for the shooting, Jauch said, and they don't know how the shooter left the area.

FOR THE RECORD
5:20 p.m., Aug. 22: A previous version of this article misspelled Davis' first and middle names based off information from the coroner's office.
-----------

Do you have information to share about the life of Branden Marcel Davis ? The Homicide Report needs your help. Please fill out this form or e-mail us at homicidereport@latimes.com.

Share a memory or thought about Branden Marcel Davis

You will be missed youngster. You were always a well mannered and respectful person. You helped when I asked you too and never caused any trouble in the 10 years we were neighbors. Now you've been called so soon, we pray that you rest in peace.

I would always see you at my moms house bro with my brother you was always welcome..still hard to take in