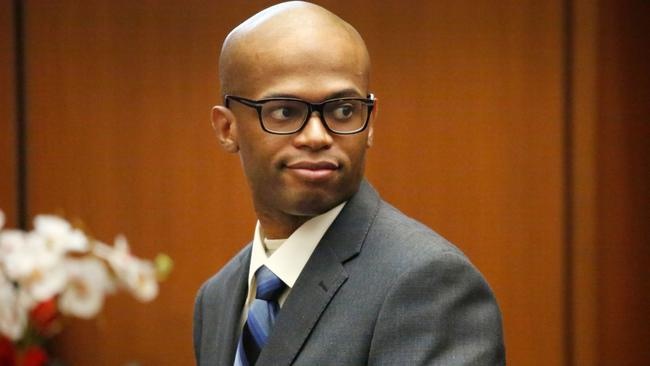 It started with a crush and a spat over cash.

Ezeoma Chigozie Obioha had his eye on a woman who had done social media work for his business. But she turned him down, prosecutors said, and eventually notified state officials that he owed her more than $1,000 for work she had done to promote his company.

Soon after, someone blasted her in the face with a shotgun as she was walking with her boyfriend to a restaurant in Hollywood.

Before long, authorities focused on Obioha.

On Tuesday — after about a day of deliberating — jurors convicted Obioha of first-degree murder, ending a mystery over the brazen slaying of Carrie Jean Melvin, 30.

As the clerk read the verdict, the victim's father closed his eyes and cried quietly into his hands. One row back, the defendant's sister's eyes widened and she mouthed, "what?" in disbelief.

The defendant stared ahead, expressionless.

Outside the courtroom, Bernard Melvin spoke in a hushed voice, saying that he hoped people would remember his daughter and that he felt great compassion for the defendant's family.

Jamon Hicks, one of Obioha’s attorneys, said his client was saddened and hurt by the verdict, adding that he plans to file an appeal.

Hicks pointed out that his client always came to court with a big stack of papers — the result of copious research on the case.

“I've never had such an engaged client in my life,” Hicks said. “To me that was a sign of an innocent man.”

During closing arguments last week, a prosecutor portrayed Obioha, 32, as a scorned suitor who also was upset that Melvin had filed a claim against him for money he owed her.

Days before the killing, Deputy Dist. Atty. Michele Hanisee told jurors, Obioha had been notified that Melvin had filed a claim with the state Labor Commission after his $1,620 check — for 87 hours of work she did marketing his clothing line on social media — bounced.

The prosecutor said the victim also spurned Obioha’s romantic interest in her.

“She gave him a smack down,” Hanisee said. “She rejected and challenged him.”

The morning after the July 5, 2015, killing, a boy playing on the beach in Malibu found Obioha’s Mossberg 12-gauge shotgun under a rock.

Lying nearby was an unusual shotgun shell, identical to an expended shell found at the crime scene: a white Rio Royal Grand 12-gauge, 00 buck shell with the head stamp “globalshot.com.”

Defense attorneys suggested that both shotgun shells, as well as the gun, were planted. A blast from a Rio Royal shell would have caused more wounds to the victim’s face, they argued.

Obioha’s mother, Pauline Obioha, told jurors last week that her son was at home the night of the murder. She helped him bathe his two children before he put them to bed, she said, around the same time authorities say he was driving to Malibu to get rid of the gun.

Hicks asked Obioha’s mother whether she was lying to protect her son.

“That’s the one thing I wouldn’t do for any of my kids,” Pauline Obioha told jurors. “I wouldn’t lie.”

The defense attacked a six-man photographic lineup that two witnesses — Melvin’s boyfriend and a security guard who saw the attack — used to identify Obioha as the gunman.

After the guard described the shooter as “abnormally dark,” he pointed out two possible suspects from the lineup.

One was Obioha, whose photo was the darkest in the lineup.

“That is manipulated,” attorney Dana Cole told jurors, referring to the photo. “That is totally manipulated, and it’s just not right.”

Hanisee used her final words to jurors to poke holes in the defense arguments, suggesting that Obioha’s family lied and fabricated evidence to protect him.

Defense attorneys had downplayed the idea of a financial motive for Obioha by showing jurors a receipt indicating that he paid Melvin $1,740 in cash on the same day he wrote the $1,620 check that didn’t clear.

But Hanisee called the receipt book “fishy.” Obioha’s sister found it after her brother’s arrest, and the May 2, 2015, entry in Obioha’s receipt book was out of chronological order.

The obvious conclusion, she said, was that the receipt was fabricated.

“Every scrap of evidence that points to anyone points to him,” Hanisee said.

And it was just a month ago, she told jurors, that Pauline Obioha said for the first time that her son was with her on the night of the murder.

“I think at some point, her mom instincts overtook her,” Hanisee said.

In phone calls from jail, she added, Obioha gave his family different explanations about what happened to his gun. First, he said that it had been stolen. Then, that Melvin’s boyfriend had taken it to set him up.

Lastly, he said it had been planted by an ocean photographer who wanted his Instagram and Facebook accounts featured on the news, the prosecutor said.

“He’s spinning stories for his family, and they are more than happy to believe him,” Hanisee said.

In reaching their verdict, jurors also found true the special circumstance allegation that he committed murder for financial gain. Obioha — who is scheduled to be sentenced on Jan. 5 — faces life in prison without the possibility of parole.