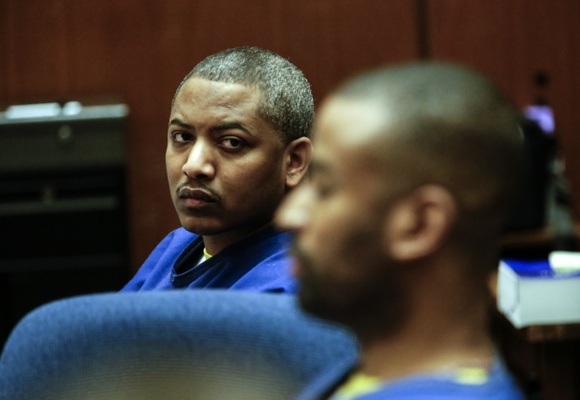 Two men were sentenced Friday to life in prison without the possibility of parole for killing a man during a planned robbery in 2009.

On May 26, 2009, Sconiers and Aikens posed as police officers and went to the apartment, Marshall said. During the robbery, the men attempted to put handcuffs on Caufield, according to evidence presented in court. It is unclear which man fired the fatal shots, the prosecutor said.

In the days after the attack, the men changed their appearances and fled to Arizona, according to the prosecutor. The TV show "America's Most Wanted" showed a segment on the two, and Sconiers, the son of a professional baseball player, was arrested in February 2011. Aikens was arrested in October 2011.

Before their sentencing in a downtown courtroom Friday, Sconiers and Aikens, who represented themselves, made a motion for a new trial, but the judge denied the action.

Caufield’s friends and family had filled the first two rows of the courtroom.

Several family members spoke about how Caufield’s killing affected them. And Kathy Caufield, Brian’s mother, said she had been preparing her statements since the men were convicted:

March 26, 2009. That's the day Kenyon Aikens and Daryl Sconiers Jr. murdered my beloved son who I will never see his smile or hear his laugh again. He was gentle and giving and didn't deserve to die at the callous hands of people who betrayed him and sentenced me and my family to a pain that will never go away.

I heard my son die! I heard my son screaming out to me while Kenyon and Daryl carried out their calculated plan to rob and murder my son. I heard everything you said. I heard the three shots that you fired that ended my son’s life and all of his dreams. Your voices and those three shots are forever burned into my memory.

Your cowardly actions have led to a misery that is indescribable that I relive every day. You are both cowards, killing a man in cold blood and running and hiding until you were chased down and captured like animals.

Fighting extradition, dragging trials out as long as possible and now, finally, exactly 30 days short of 7 years since you murdered my son, it is your time for sentencing -- time for you both to finally accept the well deserved punishment that will be handed down today.

I believe that life without the possibility of parole can be the only sentence, the very same life sentence that you have given me. I relive hearing my son die over and over. Like a recording that loops in my mind -- morning, noon and night -- there is no escape.

A mother hears her child's cries when they are born -- I was not supposed to hear my son’s last cries before he was shot dead and silenced by the two of you. I wake up every night hearing his cries and the gunshots that ruined my family's lives forever.

Kenyon and Daryl -- you deserve nothing less than life imprisonment without the possibility of parole. I will follow you both to hell to ensure my son's justice.

Photo: Kenyon Aikens, left, and Daryl Sconiers Jr., right, were each sentenced February 26, 2016 to life in state prison without possibility for parole for killing Brian Caufield during a planned robbery in 2009. Aikens and Sconiers Jr. represented themselves in the murder case. Credit: Irfan Khan / Los Angeles Times

Kathy I jus saw this and I am so glad that those two wur finally prosecuted.
Justice for BRAIN has definitely been served...
LOVE You Always
Rest In Paradise My BROTHER...

What about having your own money. Why taking someone's life for their money.

As powerful of a statement as could be written.

Too bad a prison guard cant be required to wake them up every morning and remind them of the number of days they have been in their cell. Make their stay as miserable as possible.

Kathy and Ashley,
Your memories of Brian shall live forever within your hearts- he is always by your side just as the pain is deep within each of you.
God bless you both,
Mary Furnas

Kathy our thoughts and prayers continue to be with you and your family! It took almost 7 years but finally justice for Brian has been served! We miss you Doughboy Rest in Peace my friend!