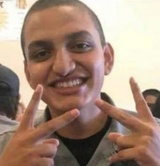 About 1:45 a.m., Delgado was driving a burgundy Honda Accord on East Pacific Coast Highway and made a left onto Drumm Avenue, said Los Angeles Police Officer Jeffrey Tiffin. Delgado, who was with two others, was driving a friend home.

Another vehicle, possibly a dark-colored sedan, followed behind him and a person inside shot at Delgado’s car from behind, Tiffin said.

Delgado was struck and taken to a hospital, where he was pronounced dead.

Delgado was driving his friend home from a Fourth of July gathering, police said. It’s unclear what prompted the shooting.

Share a memory or thought about Daniel Felipe Delgado

Danny just needed to say I miss you alot just like always . I go anywhere and think about you any where we go some thing pops out and boom hey remember when Danny this or when Danny that but always on our minds. Well just needed to share that mijo I continue to miss you till the day we see each other again . I love you mijo . Your pops always love you son…
ROBERTO DELGADO…

Today marks a whole year without our son Daniel Felipe Delgado,
Son you were taken from us at a very young age. We miss you so much I still continue to not 100% believe that you are gone. In my head I try to convince myself that maybe you are still at sunburst and will be home soon, but the more I try to convince myself. All the missing and love that I have for you dose not let it sink into my brain!!! I just miss you so damn much I don’t think it’s ever possible to accept that your gone.I know you are taking care and watching over us as our guardian angel .I miss you so much Danny it hurts my heart on a daily basis. I wish I could take this year back and made a better decision and stood there with you that night… I love you so much and miss you and I speak for all of us . Love you forever son your dad always,
Roberto Delgado

I miss you forever and love you endlessly cousin ❤️🕊

I’ll always remember you as a happy, always smiling person. Never thought that the day at work was going to be the first & last time seeing you in years😢 breaks my heart! Miss & love you danny🤍