For Daniel Delgado’s 20th birthday, he had planned a low-key road trip with friends to bask in the Arizona sun.

But eight days earlier, on July 5, Delgado was gunned down while driving a friend home from a small Fourth of July celebration. Instead, friends and family gathered at his Wilmington home on the day he would have turned 20 to mourn him.

There was a chocolate cake, and at one point, everyone sang "Happy Birthday." People wore red, his favorite color, as they released red and white balloons with messages to the slain 19-year-old.

“He was just a young kid, enjoying life, enjoying the Fourth of July,” said his aunt Gabby Banales. 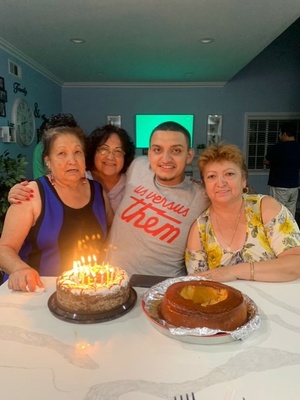 Delgado had no gang ties. Police have ruled out road rage as a motive and are seeking information from the public to determine why Delgado was shot.

Family members described Delgado as an outgoing, happy-go-lucky man who had recently started a car washing business with his older brother. He previously worked at a car rental business near the airport and had been laid off because of the COVID-19 pandemic. Delgado loved soccer, playing video games and hanging out with family and friends.

“He was never in a bad mood,” Banales said. Delgado lived with Banales and her husband, along with their two children and their grandparents.

Delgado spent the July 4 holiday at his house with family, popping fireworks and grilling ribs, chicken and hot dogs.  At the end of the night, Delgado left the house to drive a friend home.

At 1:45 a.m., Delgado was driving a burgundy Honda Accord in the area of East Pacific Coast Highway and Drumm Avenue with two others inside when a person inside a car behind him began shooting, and Delgado was struck.

At about 2:20 a.m., his mother, Sonia Banales received a phone call from a friend who was in the car with Delgado. His parents rushed to the hospital only to be met with news that Delgado didn’t survive the shooting.

Sonia Banales said she will miss her son’s morning and night texts.

Ashley Delgado, a cousin, said Delgado was able to enter a room and cheer everyone up.

“He would have this light to him where he would put a smile on everyone’s faces,” she said.

Other family members said they were shocked and saddened by the killing.

“He was never involved in anything,” said his cousin Caroline Villagran. “He made friends everywhere. It’s a surprise that someone would have an issue with him in the first place.”

Christina Banales, 26, said she will miss seeing Delgado as she’s coming home from work. Delgado lived next door to her and would often greet her when she got home.

Banales joined the gathering Monday for Delgado, where she wrote a message to Delgado and placed it inside her balloon.

Gabby Banales, his aunt, also wrote a message. She wrote that the shooting should not have happened. Delgado should still be here.

Update, 7/18/2020: Ashley Delgado's comments have been updated. A previous version said her family lost an uncle, Delgado was speaking in the hypothetical.

I miss you so much Danny. It hurts so much not having you here. I'm so happy that we got so close the last four years of your life and had so much fun just hanging out. I miss it so much. I feel so empty without you... nothing is the same, I love you so much.

Another month without our son Danny, we miss and love you so much !!! I often ask God why our Danny? You were always so kind and friendly to everyone you met. I always ask your mom hey remember when we use to pick up Danny or remember that or this when Danny. We have so many memories you left in our hearts and will carry proudly with us and remember you for being so happy and lovable towards all the family.
We love you forever and thank you for all the wonderful memories you left in all our hearts. I wish you never would have left us you are to young to of left us. We love you forever.
Love you Mom &Dad

We Miss You so much everyday. Some days the memories still knock the wind out of us. We wish you were here, so We could tell you how much We need you and how hard everyday has been without you. Not a day has gone by that We don’t talk or think of you, You will continue to live through us. You are forever in our Hearts ❤️. We will Love and Miss You forever, until we meet again. ❤️ Mom & Dad

Dear Danny I love you so much,And miss you so many times more!!! It has been so difficult to think about you leaving us at such a young age. Well son just wanted to tell you we miss and love you so much!!! Love you always mom and dad

I miss you son !!! I love you so much. If I could only go back in time I would have taken you home with us that night ...miss you every day more and more,we love you always Danny mom&dad

Prayers for the family to find peace and prayers for God to bring the person forward that did this so there will be justice for Daniel. Rest in heavenly peace sweet Angel 😇

You will truly be missed kiddo.. How can whoever did this to you sleep at night knowing the pain he caused. You have no heart. We love n miss you.. RIP #LLC

I will miss him dearly! This was a heartless act by a coward... Who won't do the right thing and turn themselves in.