Gunshots down the hall, then a grisly discovery

This post has been updated. See the note at the bottom for details.

Shamika Shoels was sitting in the bedroom of her Inglewood apartment Tuesday afternoon when she heard shots.

She rushed into the hallway and saw a gunman fleeing.

In her living room and kitchen, Shoels discovered a terrible scene. Her son, Datwan Henderson, 22, was bleeding and clutching his neck. His girlfriend, Crystallyn “Asia” Nguyen, 18, had been shot.

Nguyen and Dawson later died at a hospital. Henderson is in critical condition. 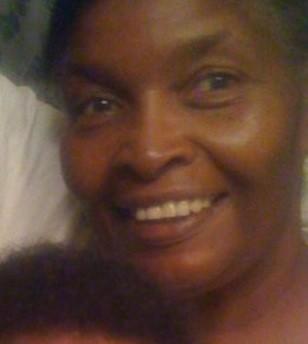 Inglewood police on Wednesday took Nguyen’s former boyfriend, Justin Marquis Scott, 20, into custody and have called him a “person of interest” in the shootings.

At a vigil held Wednesday, Shoels moaned and yelled as she recounted what she saw the day of the shooting.

Around her, dozens of people stood looking on silently with pained faces. A couple of people watched from the windows of second-floor apartments. Outside Shoels' apartment, someone had placed a wooden rocking chair with a sign taped to it saying: “This seat is reserved for Mrs. Dora Dawson.”

"She was a wonderful person," Shoels said of the mother of four and grandmother to more than 10. "She didn't deserve this."

Shoels described the chaos that ensued after the shooting. She called 911.

"I said please, my mom, my son and his girlfriend have been shot," she said.

She then set the phone down because, she thought, they have to hear what's going on.

Her son was grabbing his neck, so she wrapped a blanket around it.

The moments before paramedics arrived seemed like eternity. She jumped on top of her mother, attempting to render aid.

She then ran outside to the street, screaming.

After the vigil, Dawson’s granddaughters described her as a woman with a penchant for Western movies.

She was a problem-solver for the family, they said, a woman who kept “everything together.”

“Who would do this?” asked Mercedes Mackbee, 26. “Something is not right.”

Correction: A previous version of this post referred to Datwan Henderson as Datwan Anderson.

While my heart goes out to the family for their loss, the young man who was Arrested for the murders of Ms Dawson, Ms Nguyen and the shooting of Datwan Henderson was released by the police dept. It seems this young man Justin Scott had maintained that he was innocent the whole time but no one would listen. Finally his lawyer went and search the Compton Shopping Center where he stated he was at during the time of the murders and sure enough a video was found proving his innocence. The problem I have is that the elaborate story that was told how he argued with Datwan, chased him into the apartment and shot three people. I hope the true scenario is not that Datwan shot and killed his girl friend, struggled with the gun and shot his mother, then accidentally or on purpose shot himself. The detectives dropped the ball on this one, but the only person who knows the truth is Datwan, Justin Scott who was fingered by Datwan has been released because he could not be in 2 places at the same time. Real justice comes when the real perpetrator is caught and prosecuted to the full extent of the law.

How do you know he had no one to turn too? Why try and make up a sad story for this guy? What about Ms. Dora and the other 3 people who were shot? Who could they turn to? Yes his life is ruined, but 2 lives were taken. Ms. Dora had her life to live too! Another person has to live with the fact that he ran for safety and two people that he cared for were killed. What about the innocent?!!!! I agree with Why? and Matthew! So sick of these enablers. Hearts should go out to innocent victims.

Matthew No I am not a family member, nor do I have more compassion for Justin than I do for the people He murdered. It is clear that you misunderstood me. I clearly stated that what He did was awful and He had no right to take away another's life due to his emotional distress. I believe that he was not able to cope with whatever the situation was and he clearly acted out of anger, but I also believe that If He could take it back He would. He's young and He ruined his entire life and the lives of others, and for that he deserves whatever punishment he gets. The only sympathy I have for him is the fact that He had no one to turn to who could have stopped him before it was too late.

It's a sad day when we have much mofre compassion for sociopaths then their victims. I'm sure you have to be a family member to even type what you just sad. We all have felt some type of pain but at the very least did many of us feel the need to put a bullet in 4 persons living 2 dead. I just cannot grasp the idea of doing something like that. Jealousy and envy is force to be reckoned with yes! However, a grandmother lay dead, and for what because of some teenage puppy love? He has true realization right now no doubt.

This story is so sad. Poor baby ruined his life over a broken heart. My heart goes out to both him and the victims. We've all probably felt the same pain that caused him to commit this heinous crime, but obviously he couldn't deal with it and had no one to help him through it. But in the end he should be held responsible for his crime. Hopefully he has some type of realization and sees that what he did was wrong.

So sad that a grandmother is shot and killed by a 19 year old kid. What did it profit to commit double homicide? Did you get your girlfriend back? These young people today are extremely angry and because some these young people are products crack epidemic, society suffers...Thank you AmeriKka you reap what you sow...and I cannot leave out some of these women who were very young single mothers....so when you drink alcohol, smoke weed and God knows what else this is what you birth...I see it everyday at work in the Welfare office..anger, laziness, entitlement, disrespect, ungrateful, greed, fraud ...if not all many. The young men today have very abusive behavior...Thank you lol Wayne, tyga, 2 chains, Kendrick, Jay z, Nwa, meek mil, the list goes on...our kids live this filth. Yes I know them because I make . Sure my son stays away from this garbage...each one teach one...now somebody's mama and grandma is DEAD because a young man couldn't handle rejection..move on!

The last name of Datwan is Henderson not Anderson...I know them and will keep the family in prayer...what a tragedy. .he is in ICU now...