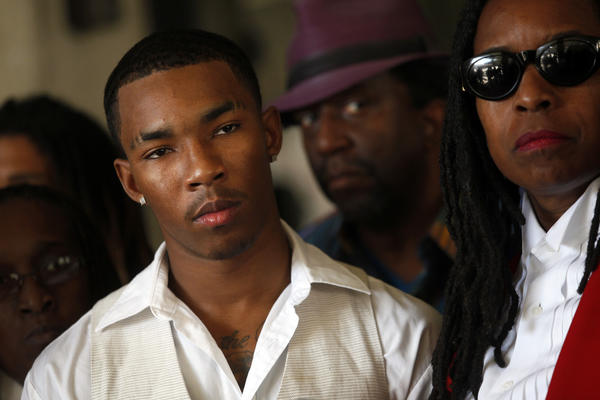 Murder charges were dropped Oct. 29 against a 19-year-old man from Compton due to a lack of evidence.

Justin Marquis Scott, who had been charged with the Oct. 8 capital murder of Dora Lee Dawson, 64, and Crystallyn May Nguyen, 18, said he spent his days in jail crying and waking from nightmares.

A Los Angeles County Superior Court judge approved a motion by prosecutors to dismiss murder charges against Scott based on surveillance footage that showed him at two shopping centers in Compton on the day of the shootings.

“Based upon newly discovered evidence, prosecutors said they could not prove beyond a reasonable doubt that the defendant committed the charged crimes,” said Jane Robison, a spokeswoman for the Los Angeles County district attorney's office.

Prosecutors alleged that Scott shot Nguyen and then Dawson as Dawson tried to protect her 22-year-old grandson, who was wounded.

Scott's lawyer, Juliette Robinson, said it was the first time in her 25-year career that she had a video surveillance timeline for a client, but the case is still troubling for all parties.

"There are no winners here," she said.

Scott said that from the beginning, he had an alibi."I repeatedly told them where I was, every step I was that whole day."

Inglewood police Lt. Gabriela Garcia said charges were based on information the investigators had at the time.

She said that evidence was not primarily based on eyewitness testimony, but declined to comment further on what led investigators to charge Scott.

he got a twin

What a stupid thing for the DA's office to say!

"Based upon newly discovered evidence, prosecutors said they could not prove beyond a reasonable doubt that the defendant committed the charged "

How ridiculous! They couldn't prove anything, because they had the wrong guy! One of the detectives was saying they were going to have to start all over again from the beginning, and look at all the evidence. Like they were complaining that they couldn't squeeze a false confession out of Justin. Boo hoo, now those detectives were going to actually have to do their jobs, instead of making Justin the killer. I'm so glad Justin didn't falsely confess. That has been happening more and more. The detectives should have been looking at other suspects the whole time, instead of praying Justin would make their jobs easy. Shame on them.

So they gave the man a permanent arrest record by a false arrest rather than doing their job properly in the first place?

Gotta love this country. Not.

@Currant
I agree, how dare the DA to not call it what it is. They messed up. They arrested the wrong person. Mr. Scott could not be in 2 places at the same time. Mr. DA you need to look into the supposedly victims account of what happened. Maybe he shot his girl friend, mother, and self. He did not bank on that video proving that he was a liar. He was so sure he argued with Mr. Scott and that Mr. Scott chased him to the apartment where he killed the 2 victims then shot him as well. Now we know that elaborate story is just that a STORY.

Lack of evidence? You mean evidence that proved that he was not in Inglewood at the time of the crime. Unless he can be at 2 places at 1 time, that's not a lack of evidence; that's a mistake. A lack of evidence suggests that he could have committed the crime, but the DA did not have enough evidence to hold him.