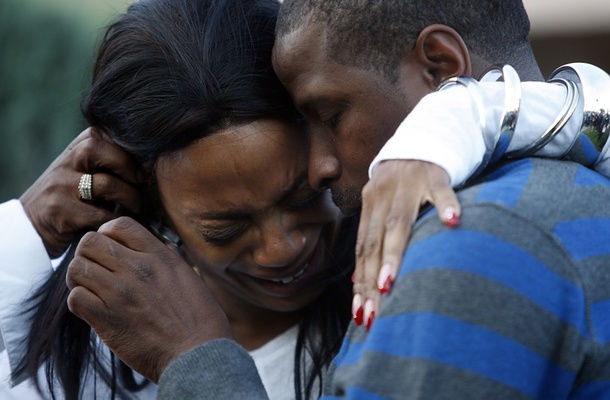 The final defendant in the 2010 Christmas Day killing of a mother in front of her 3-year-old daughter was convicted of murder late Monday afternoon, according to the Los Angeles County district attorney’s office.

Kashmier James, 25, had celebrated the holiday with family members before stopping in the 1700 block of West 85th Street in Manchester Square to visit a high school friend. She was standing outside her car, talking to the friend, about 10:20 p.m., when she was shot in the head. Her daughter was still in the car.

The night of the murder, the men, members of the 111 Neighborhood Crips, drove to rival gang territory “hunting” for victims, said Deputy Dist. Atty. Antonella Nistorescu. The men spotted James talking to a 26-year-old man and assumed he was from a rival gang.

The gunman, McKnight, jumped out of a blue SUV and began shooting. James was struck in the head and collapsed on top of the man. The man, who was uninjured, managed to escape.

“It’s tragic in the truest sense of the word,” Nistorescu said.

During the trial, a gang member testified that the driver of the car, Houston, told him about the shooting. A street informant also testified about McKnight’s role in the shooting.

To the gang members, James was “collateral damage,” Nistorescu said.

“It just goes to show that there’s just no limit to the violence,” Nistorescu said. “There’s no understanding that anything is sacred.”

The vehicle, which witnesses described as a dark blue SUV with chrome rims, was repossessed after the shooting without the rims, which were found at a family member’s home during a search.

Simon, who is also black, is facing 29 years in state prison and is set to be sentenced Aug. 19.

Photo: Kim Evans is comforted by Christopher Jackson in December 2010 as they announce a $75,000 reward for information leading to the arrest and conviction of individuals involved in the Christmas Day murder of her daughter, Kashmier James, 25, in South Los Angeles. Credit: Luis Sinco, Los Angeles Times

i send my deepest sympathy to this family I know all too well about losing a child to gang violence and I am so glad that the suspects were arrested and held accountable for their heinous actions, my son's killers were also apprehended and subsequently sent to prison for 75 years to life. I would love to have my son back but knowing they can do no more harm to another human being brings me just a lil bit of hope. God bless.

Chris, im happy that they found all those involved with your daughter's mother's death. I remember seeing you on the news when it happened, like OMG. Now im seeing you again. Peace be with you and her family. God Bless. -Hat-

I'm so happy they caught these ignorant fools. This could have been me our anyone reading this, because these ignorant fools just don't care. And they're all cowards running in a crowd. Four people put their heads together and said let's go killing for the hell of it.

Im glad they put these barbarians away. Now they can enjoy the terror inside the prisons for the rest of their lives.

Now who was it that said that gangsters don't go deliberately targeting innocent people? Maybe he is right. They weren't after her, she just got in the way.

It is truly a shame so many people are getting killed for no reason. People should get their gun permit so if they see someone gets shot that they can shoot the attacker and wound them till the police can get there and get rid of the trash that shot the person. People wake up. Tell the police what you know and what you saw. Next time it could be you getting shot and your family will be able to know that they got the animals that shot your loved ones or killed your loved ones. People wake up. Gangs are nothing but cowards that can't fight with their hands. What a bunch of cowardly sissies. Speak Out for everyone's safety. God Bless the Police. Amen