Mitchell Maya was a planner.

At 20, he was working toward his goal of opening a barbershop ​and was planning to take the state exam for his license in December.​ His mother bought him clippers at a young age, his sister said, and he practiced on everyone he could. Maya saw cutting hair as a ticket to give his family a better life. 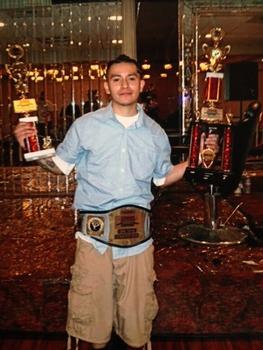 For three years, he worked at a Boyle Heights barbershop and repeated a mantra: Time is money; no days off.

On Dec. 8 shortly after 8 p.m., Maya walked outside his Boyle Heights home and was shot. Once the gunshots stopped, his roommate went outside and couldn’t find him, said LAPD Det. Jose Ramirez. Maya was found in the street a block over.

The City Council recently approved a $50,000 reward for information leading to the arrest and conviction of the killer. Police are unsure why he was targeted and are searching for leads.

“Right now, we don’t have a whole lot of information as to the motive,” Ramirez said.

After Maya was shot, he called his girlfriend, Ivette Ramirez, 21. “He just kept telling me, ‘They shot me,’” she said recently, sitting on a couch at her mother’s home.

One-year-old Jayden, her son with Maya, sauntered around the home, smiling and eating chips.

“He was so good to him,” Ramirez said of the father and son as her voice trailed off. Ramirez looked down and fidgeted with her hands.

Her best friend, Ashley Padilla, sat next to her. “We want to find out who did this to him,” Padilla said. “He had a career.”

Ramirez set up an altar for Maya at her mother’s home. There’s a belt he won in a barbering competition, a pair of clippers and framed photos of the couple with their son.

“I miss seeing him with Jayden,” Ramirez said.

Three days before Maya died, he organized a barbering competition in Highland Park. His sister, Meneysse Maya, 19, remembers being impressed by the turnout. She said she pulled her brother aside and told him how proud she was.

Mitchell Maya hugged her and told her that one day, they would open up their own shop. “He was always committed to his job,” she said.

Meneysse Maya said her family is struggling to pay for funeral expenses. They held a barbering competition and fundraiser last week, but the event was disrupted by the sound of gunfire, people who attended said.

Although Maya was quiet, even shy at times, his talent was noticeable, said Jose Rodas, who attended barber school with Maya.

“The moment you see him cut, it speaks louder than his own words,” Rodas said. “He was born to be a barber.”

At 25, Rodas was older than Maya, but he said he looked up to Maya.

“How could someone take someone so good in this world, someone so peaceful?” Rodas asked. “How could they just take them out like that?”

Photo: Mitchell Maya at a barbering competition in 2015. Credit: Courtesy of Ivette Ramirez

So sad that this had to happen to a great talented person. Please contact the police if you have any information. Lets bring closure to the family, his girlfriend and most importantly to his 1 year old son.

How sad, What a world we live in today...this story really touched my heart. May God bless and comfort this family. It just seems like there is no end to this foolishness. Family just be glad for the time that you had him and shared him with us. May God bless his soul...TO BE ABSENT FROM THIS BODY, IS TO BE PRESENT WITH THE LORD..PEACE TO YOU ALL.

I translated the comment posted by the mother of Mitchell Maya.

-On Dec. 8 at around 7:30 pm my son and I were talking about many beautiful things, giving each other hugs & telling each other how much we loved each other. It was so beautiful that I never thought in my life that would be our last hug & goodbye. Half an hour later when I got home I got the news that my son was gunned down and was in the hospital. I couldn’t believe it because we had just seen each other, I never thought that the last time I saw my son was actually the final farewell between my son and me. That same night, the 8th to 9th (Dec. 8th-9th), until I woke up was the worst pain I have ever felt in all of my life, to see my son die slowly. I asked God so much for my son’s heart not stop. I put my hand on his heart and his heart would beat without stopping. There are times wish for my son to come back but I know that is impossible. But he lives in my heart, along with all of his memories, his smile, his last hug, and his last “I love you”. This is what is keeping me alive and remain in me to keep fighting for his dreams. Since then my heart is missing a piece, which is my son. Even though he is in heaven, he has here a mother that is a warrior that never gave up and will never give up. Like when we both spent 2 years together in high school in order for my son to graduate and we accomplished it. Also on December 31, even though he wasn’t present, he obtained his state license to be a barber. My son was a hair designer and is a legend is his talent. One of his many dreams was to have his own barbershop in Hollywood. He left in my hands 12 trophies, one championship belt & a trophy cup, the last one he won was in November. He left his dreams in my hands and for me it is an honor to be dreaming his dreams. On February 21 he held his first even called "youngster the barber battle", it was a success it was so beautiful, a newscast even showed up. To all the youth out there pursue your dreams because it can be done. Atte: Family Maya Morales