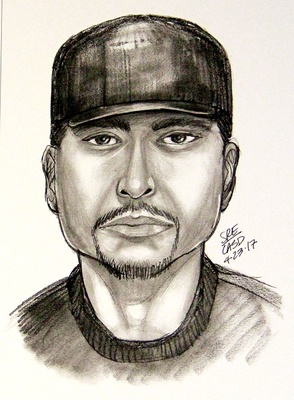 Oscar Garcia, an aspiring photographer and high school senior, was just hanging out with two friends the night of April 22, 2017, in the Monrovia garage outside one friend's home, when a tall Latino with a thin mustache-goatee burst into the garage, exchanged a few words and began shooting.

Garcia, 18, was killed by the bullets that seriously injured his male friend in the 100 block of West Cypress Avenue. His female friend was unharmed.

It was the first homicide in Monrovia since June 2015. The quiet, shady street where Garcia died sits behind a modern business park, and signs outside several homes urge motorists to "drive as though your children live here."

Garcia "was a true innocent victim," Matlock said. "There are people who live a lifestyle that causes them to be murder victims, and he wasn’t one of them. I believe he was shot in a case of mistaken identity, by someone who was looking for a gang member. Oscar was not a gang member. He was just a good kid in the wrong place at the wrong time."

A reward was first offered in September 2017, but it expired after 90 days and no leads, Matlock said. He got busy with other homicides, he said, but couldn't let go of the Garcia case. He hopes renewing the reward will produce enough information to find the gunman.

Garcia grew up in Monrovia and played soccer at Canyon Oaks High School. After graduation in June, he planned to attend Pasadena City College and study photography.

He was the second youngest of six children raised by their single mother, Guadalupe Castañeda, who spoke through tears about her son during a news conference in May 2017, asking for the shooter to come forward.

She described her son as a loving, “extraordinary kid,” who would “always go the extra mile to care for us. He loved skateboarding. That was his passion and that’s how he made a lot of friends,” she said. “He used it as a way to bring peace and love to the community.”

Photo: Investigators have renewed a $20,000 reward in the hope of finding the man who fatally shot 18-year-old Oscar Garcia on April 22, 2017. The man, a sketch of whom is shown, is described as a light-skinned Latino, about 6 feet tall and medium build, with brown eyes, short black hair, a thin mustache and goatee and a black baseball-type cap with an unknown logo. The drawing was provided by the L.A. County Sheriff's Homicide Bureau.

This is so sad. He was just a kid. Sending my prayers.