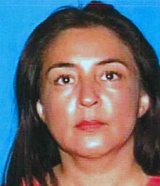 Maria Ines Morales, a 45-year-old Latina, was fatally shot Monday, Aug. 11, in the 14000 block of Herron Street in Sylmar, according to Los Angeles County coroner’s records.

Shortly before 9 p.m., Morales’ son called 911 to report that his father was firing a gun in the home, according to a news release from the Los Angeles Police Department. Officers arrived and found Marina Ines Morales in the living room. She had been shot multiple times.

Police then found a 59-year-old man, later identified as Albino Topete Morales, who is Latino, in a bedroom lying on a mattress. Police said it seemed as though he was waiting for police and was taken into custody without a struggle.

Morales, who had been married to Maria Morales for more than 25 years, had been drinking heavily, police said.

A Colt .45-caliber pistol was on a table in the bedroom along with a handwritten note in Spanish.

Morales was charged with murder Aug. 14, according to the Los Angeles County district attorney’s office. He is scheduled to be arraigned Sept. 11.

Share a memory or thought about Maria Ines Morales

My son Alfredo Reveles speaks really fondly of Ms Maria. She was really helpful with him when he was having a hard time adjusting to school and I will be forever grateful. My son always laughs when he members that miss Maria would tell him she had spiders in her hair jockinly to make him smile. She will be missed she was truly a great teacher. Prayers to her family.

I'm very heart broken with the tragedy of Mrs.Maria who was my daughter's teacher, she was an amazing teacher very sweet, kind and loving she'll forever be unforgettable.May God keep her soul and may he place his healing hands over her children and family.
My prayers go out to her family and to the SF Early Education Center Family.

Mrs. Maria was such a great teacher!!!! She helped me so much with daughter, it's the little things she did that made he memorable! She is missed greatly at San Fernando ECC, THERE IS A HUGE VOID AND SADNESS. The children miss her so much. :*(

Ms. Maria Ines was my daughter's teacher. There was no task too small for her. She always went above and beyond the call of duty. A very hard working woman. I truly admire her. She will be missed by so many people.