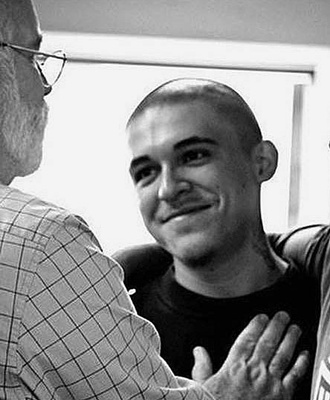 Three weeks before he was fatally shot by a Long Beach Police officer on March 10, Martin “Marty” Hurtado reached out to his former mentor at Homeboy Industries, trying once again to change his life.

“He was a very kind kid, a sweet kid who was always very gentle with everyone here,” said Father Greg Boyle, founder of Homeboy Industries. “His death was really quite devastating for people here.”

Boyle said that when the two met in February, Hurtado, 21, asked if he could rejoin the gang rehabilitation program he never finished.

“I told him to take a drug test and we’d see what happens,” Boyle said. “We don’t hire people right on the spot. This is kind of a recovery program for folks who want to leave behind a gang life and embrace something else.”

Hurtado never came back. His mother, Gaby Romero, said she thinks her son stayed away because of an outstanding probation violation warrant. But her son also struggled with leaving his gang life behind, she said.

He was a bright kid who played piano and basketball, but he joined an El Monte gang when he was 13, Romero said, something she didn’t learn until after he was kicked out of high school for selling marijuana and carrying a knife. As he got older, he got gang tattoos, had two children and spent time in jail, she said.

“That wasn’t the way he was raised. He was always a good kid but he didn’t always make the best choices,” said Romero, a department administrator for Kaiser Permanente Medical Center who is also working on a doctorate in mythology.

“He didn’t share too much about the gang rituals — he kept that hidden from us — but he did say when you were in gangs, you either got the job of hurting people or selling drugs, and he did the drugs. He was never a violent kid; he was more of a lover.”

Romero said he was sent to rehab, and when he successfully finished, she was hopeful he would return to school. But two months later, she said, she got a call that Hurtado had been badly beaten by members of a rival gang.

He spent more than a year with Homeboy Industries and earned his GED, she said. “But he told me once, ‘Mom, it’s kind of tough being there because you have to make a choice to be in gangs or not.’ He wanted a different environment, but … he felt community with gangs.”

After he left Homeboy Industries, Hurtado had trouble keeping jobs, she said. Then late last summer, he stopped checking in with his probation officer, Romero said, and the warrant was issued for his arrest.

Romero said she told her son to turn himself in, but that he wanted to wait until after the holidays. He left her home in Duarte and went to live with a new girlfriend in Long Beach, she said, and the last time she saw him was at Christmas.

The warrant was outstanding, she said, when Hurtado ran from Long Beach police officers on March 10.

Officers were patrolling Long Beach Avenue near 68th Street about 6:23 p.m., as part of a special focus on getting guns off the street, according to a department news release. The officers were preparing to pull over a car for an unspecified vehicle code violation when it abruptly stopped in the street and Hurtado, the passenger, jumped out and ran.

Authorities said the officers followed Hurtado into an alley near 68th Street and Orcutt Avenue. “As the suspect entered the alley, he produced a firearm," refusing to drop it, the news release said, and that's when an officer opened fire.

The department identified the officer as Alex Roberts, who joined the force in May 2014. Roberts fired his weapon three times, according to records from the Los Angeles County coroner’s office, striking Hurtado twice, in the back and upper left chest.

Investigators recovered a handgun at the scene of the shooting, according to the news release, but Romero said she doesn’t believe the gun belonged to her son. “He made some bad choices, but he never owned a gun that I’m aware of,” she said.

“Marty wasn’t perfect. He lost his way. But he definitely didn’t deserve this.”