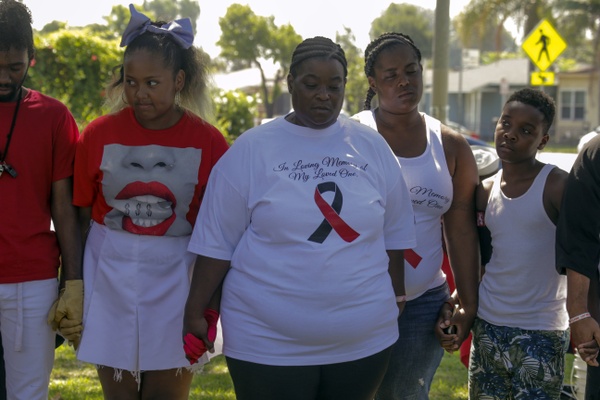 Barbara Pritchett-Hughes can’t believe that more than 365 days have passed since she last saw her oldest son. In many ways, she says, it still doesn’t feel as though he is gone.

On July 17, 2016, she had left her home to celebrate a family member’s birthday. When she returned, her 30-year-old son was dead.

That night about 7:30 p.m., DeAndre Hughes was standing outside the home he shared with his mother in the 900 block of East 120th Street in Green Meadows when he was shot.

Hughes joined his brother 15-year-old old Dovon Harris, at the Inglewood cemetery. Harris was shot and killed in 2007. Their graves are about 10 feet apart.

On Monday, Pritchett-Hughes and friends and family went to the cemetery to visit Hughes’ grave. People laughed, played music and talked about how it wasn’t DeAndre’s time.

In the last year, Pritchett-Hughes has moved away from the city she grew up in. She has started a nonprofit foundation in memory of her two sons. And she has become an activist against violence.

All of this has served as a distraction from the fact that the killer in her eldest son’s case has not been found.

When her first son was shot, suspects were arrested within six days. When the year anniversary approached, she was already going to court.

“It hurts,” she said. “Because I don’t know if the person who did it is looking at me. It hurts.”

On Saturday, Pritchett-Hughes returned to her old neighborhood to march in a walk against violence in honor of her two sons. “It’s not about me,” she told the crowd at Ted Watkins Memorial Park. “It’s about us.”

In the rising heat, the group of about 40 mothers, sisters, brother and fathers walked from the park along South Central Avenue rooting for a cause that has forever changed their lives.

Shenetha Edwards was there, too. Her husband, Darrell Edwards, 54, was killed nearly two months ago in Westmont. She hasn’t been back to work at her job as a security guard since.

“This has happened to me twice,” she said. In 2005, another father to her children was also shot and killed.

Techea Adams, whose 22-year-old son, Kejon Atkins, was killed nearly two years ago, also came from her home in Santa Clarita. Adams had moved from Willowbrook, the area where her son was killed, to escape the pervasive reminders and trauma of the killing. Since 2015, she has lost her job as a paralegal because she couldn't concentrate, she said. 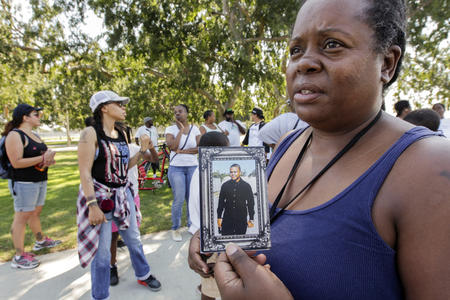 At one point, Adams would drive around her old neighborhood, jotting down license plate numbers and car descriptions in an effort to find her son’s killer. Adams is still waiting for the phone call to tell her of an arrest.

“I wish this pain on no mother,” she said.

Photo, top: Barbara Pritchett-Hughes, center, lost her second son in a shooting one year ago. She has started a new foundation and organized a peace walk for other families who have lost loved ones to violence.

Photo, above right: Techea Adams holds the photo of her 22-year-old son, Kejon Atkins, who was killed in 2015.

Barbara. You have touched so many young lives, and helped have a positive effect on lives that you will never know. I am sorry for the pain you are experiencing but i truly believe God will get the glory out of this.
Blessings