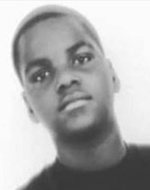 As Otis walked down the alley, which is near his home, a car pulled up and someone inside fired multiple shots at him, Alfred said.

Otis was taken to a hospital, where he was pronounced dead at 9:19 p.m., according to coroner’s records.

Otis was not a gang member and detectives have yet to identify any suspects or a motive, Alfred said.

Do you have information to share about the life of Otis Rayjon Williams ? The Homicide Report needs your help. Please fill out this form or e-mail us at homicidereport@latimes.com.

Share a memory or thought about Otis Rayjon Williams

@Richard Buchanan, this could have been anyone there’s multiple gangs over there. Or it could have also been other types of criminals like drug dealers, guns dealer etc... who may never know.

The suspects could be anyone. This area is ripe w/ niggas from Watts, Florencia, Eastcoast, bloods, crips and a whole bunch of other niggas. It’s crazy over this side cuz every other block you got niggas trying to lay claim. And for a young black man to be walking around that time, niggas is out patrolling looking for trouble. It’s a shame cuz young bull looks like a baby face.

Florencia 13 is among the likely suspects behind this murder.

He was only a baby. You could look into his sweet face and tell he was a child, I don't care how tall he was. I pray that God will comfort his family and I pray that the animals who did this is caught. I pray no peace to them until they turn themselves in to the authorities. In the name of Jesus, Amen

He was my son classmate in middle school and a good friend of my son .. my son was broken when he heard the news may he rest peacefully he was full of joy my son recalls how they use to joke around wile they walk home from school prayers to the familie please let their be justice for him amen

He was only 14 years old of age and didn't get to live his whole life to the fullest! I'm truly heartbroken because he's a young teen and didn't have any gang ties and wasn't a gangbanger at all! I feel for his family because I know that they're going through alot of pain and heartache, and I'll be keeping this family in my prayers. My condolences goes out to this family aswell and praying that they get justice and find their killer or killers really soon. Too many of our young teens, young adults and youths are dying due to gun violence! This gun violence must come to an end!😰😒😢😔