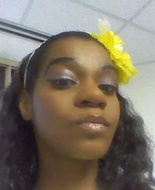 Porche Ledae Charles, a 28-year-old black woman, died Sunday, May 3, after she was shot in the 2400 block of West 62nd Street in Hyde Park, according to Los Angeles County coroner’s records.

Charles was at a family member’s home celebrating a birthday on May 2, said LAPD Det. Chris Barling. Shortly after 11:30 p.m., Charles was standing on the front porch, he said.

A man walked up and opened fire from the sidewalk. Charles was struck once and taken to a hospital where she was pronounced dead at 12:29 a.m. on May 3.

An earlier version of this post, citing coroner's records, said Porche Charles was 30. Her family and police say she was 28.

Share a memory or thought about Porche Ledae Charles

Im so so sorry for your loss.. Its really sad to read stories like these and you all seem like a huge caring, loving family.
I live in Australia and this kind of thing rarely happens, well where I live it doesn't happen at all . But it brings to light about the gun crimes in the USA. I see it only in the movies but seeing the face of a beautiful girl that died in these circumstances is heartbreaking, how could anyone do this to another human being. I hope they have caught the coward who did this and if not I hope they do !!!
My heart goes out to you all.
God bless x

I'm from Canada and stumbled across the article when I was reading the paper. I just wanted to give my condolences to your family. It sounds like she was a wonderful person and will be truly missed.

Porche was my auntie but we grow up in the same house .. She was my sister more then anything.... She loved hard really hard... I remember our last conversation it was a week before the shooting she had called me to check on me after my surgery that was her she loves her family now she's gone taking from us.... I love you Biggie my sister/aunt....

Cheshi I'm sorry for your loss.
If your cousin was killed in front of family when she was killed, why haven't those responsible been charged?

Porche is my baby Sister I love her with all my heart she was taken from us toooooooo soon. My heart aches every day for my niece, my Mother, My father, Brothers. And Sisters .28 years, 4months, 8 days i was blessed to have her in my life. she loved every body ,she loved her family, she loved her beautiful. Daughter. She loved me ,she loved to have a good time she loved to party, to drink to dress up she loved joke dance and fight with me all my life. I love her she will be truely missed by many .especially. our family.

Porsche Charles was my younger cousin ,she was loving , caring also out going! Porsche would give her last if she knew you. I'm appealing to the public for your help in finding whomever done this to our PRECIOUS angel!!!! Her 9 year old daughter is without her mom. Who kills someone in front of their family knowing well that we are Innocent people. Help us find the killer PLEASE!!!!