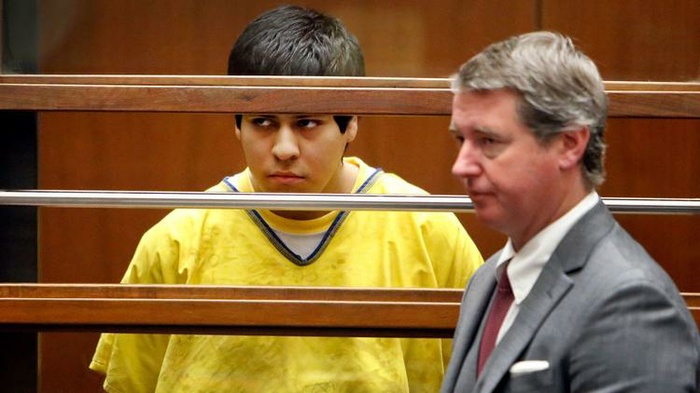 It took about two hours on June 8 for a downtown Los Angeles jury to convict Andrew Garcia of beating a USC graduate student to death.

Garcia, 21, is the second person to be convicted of first-degree murder in the 2014 death of Xinran Ji, according to the Los Angeles County district attorney’s office.

Ji, 24, was walking home near USC’s South L.A. campus after midnight on July 24, 2014, when authorities say Garcia and three other people confronted him.

Garcia, two other men and a teenage girl attacked Ji with a blue baseball bat and a wrench, prosecutors said.

In interviews with detectives, the defendants said they targeted Ji — an engineering student who had been walking home from a study group — because he was Chinese and they thought he had cash.

The group pummeled Ji, but he managed to escape. Prosecutors said Garcia then chased Ji down and struck him several times with the baseball bat.

Ji still managed to walk back to his apartment, leaving a trail of blood along the quarter-mile route. He made it to his bed and, hours later, a roommate found him dead, prosecutors said.

Later, prosecutors said, Garcia and the rest of the group drove to Dockweiler State Beach, where they accosted and robbed a couple. Garcia was convicted of robbery for the beach incident along with attempted robbery and assault with a deadly weapon.

Following Monday’s verdict, Garcia faces life in prison without the possibility of parole, said Greg Risling, a spokesman for the district attorney’s office.

Ji’s death rattled the university — particularly its Chinese community. Parents and family members of students gathered in Beijing to seek answers about the brutal killing, while dozens of students descended on the downtown L.A. courthouse to witness the defendants’ hearings.

About 4,600 of USC’s 10,500 international students hail from China, according to figures on the university’s website.

Ji’s death came amid a slew of violence at the university. In 2012, two Chinese graduate students were shot and killed in a botched robbery near campus. Six months later, a man fired gunshots in the middle of campus outside a Halloween party. The shooting injured four people, although none attended USC.

Gurrero, who was 16 at the time of the attack, was found guilty in October of first-degree murder, robbery, attempted robbery and assault with a deadly weapon. She faces life in prison; her sentencing date has not been set.

Two others charged in the case, Alberto Ochoa and Jonathan Del Carmen, are in jail and awaiting trial.