Victor Valencia, a 31-year-old Latino, was shot and killed by Los Angeles police on Saturday, Jan. 11, near South Venice Boulevard and Tuller Avenue in Palms, on the border with Culver City, according to Los Angeles County coroner’s records.

Shortly before 1 p.m., a sergeant with the Los Angeles Police Department responded to a call of a man with a gun near South Sepulveda and Venice Boulevard, according to a video released by the LAPD detailing the incident.

The sergeant saw a man matching the description he was given, stopped his vehicle, got out and saw the man, later identified as Valencia, pointing a gun at him, according to a prepared LAPD statement.

A person in the area also said that Valencia was pointing a gun at the officer.

The sergeant began shooting at Valencia, who collapsed. Paramedics responded and Valencia was taken to a hospital, where he was pronounced dead at 1:26 p.m.

Surveillance video in the area showed Valencia waving and pointing what looked like a gun in a gas station parking lot. He also appeared to be talking to himself.

Multiple people called 911 to report a man with a gun and one woman said that Valencia was “pointing at people and making bizarre gestures.”

The sergeant who responded to the call did not have his body camera powered on, so footage from his perspective was not shown in the video. Instead the department showed body-worn camera footage from other officers in the moments after the shooting.

Valencia can be seen lying on his back on the ground, motionless. Officers approach him with caution, then roll him over to handcuff him.

Near his left hand, police found a bicycle part. 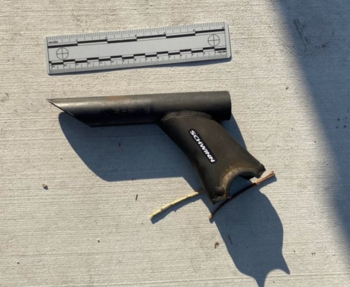 Police released an image of the part the Friday after the shooting, hours after activists staged a rally calling for transparency in the investigation.

Under rules adopted by the Police Commission in 2018, video from “critical incidents” involving the police automatically become public within 45 days of their occurrence, but the activists called for the LAPD to release the footage immediately.

The LAPD released video on Jan. 27 because of a “significant community concern regarding this incident.”

At the rally, the activists held a banner printed with a rough map of where the deaths of homeless people took place in 2019 and the slogan “3 a Day in L.A.” — the approximate rate at which unsheltered people are dying.

The sergeant involved in the shooting was identified as Colin Langsdale from the Pacific Division.

Do you have information to share about the life of Victor Valencia ? The Homicide Report needs your help. Please fill out this form or e-mail us at homicidereport@latimes.com.

Blame the cops if you want, but plenty of individual civilians thought what he held looked like a gun and considered Valencia to be a clear and present danger. Another mental case wandering the streets of California because our idiot liberal politicians are too squeamish to institutionalize people who desperately need it.