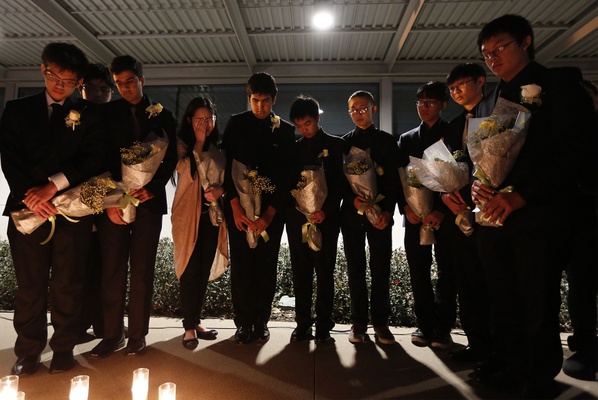 Los Angeles County Sheriff’s Department investigators believe Lin and his 15-year-old brother, Anthony, were sleeping in their family’s three-story townhouse when they were struck on their heads with a heavy object and killed, said Lt. Eddie Hernandez.

The boys' bodies weren’t discovered until around noon, when their mother came to wake them up. She found William Lin first in his second-floor bedroom and called 911, Hernandez said. She and the paramedics found Anthony a short time later in his third floor bedroom with similar injuries.

Both boys were pronounced dead at the scene at 12:53 p.m., according to coroner’s records.  They were their parents’ only children, Hernandez said.

The boys’ uncle, Deyun Shi, also known as Jeff Shi, 44, who lived in La Cañada Flintridge, is the suspect in the case, Hernandez said. Shi, a  Chinese citizen, left Los Angeles by plane Friday and landed in Hong Kong around 5:25 p.m. local time Saturday, where he was arrested by Chinese authorities, The Times reported.

The Los Angeles County district attorney’s office filed two murder charges against Shi on Jan. 28, accusing him of using bolt cutters to kill his nephews. Shi is also charged with injuring a spouse by personally inflicting great bodily injury using a deadly and dangerous weapon — a maul, according to a department news release.

During a hearing for those restraining orders on Jan. 21, Shi became angry when he learned his wife had filed for a divorce, Hernandez said.

That night about 11:15 p.m., Shi allegedly broke into his family’s home in the 5200 block of Vista Miguel Drive and attacked his wife with the metal edge of a maul, a tool typically used for splitting wood, Hernandez said.

Shi allegedly struck his wife several times on the head and chest before their 15-year-old son intervened and Shi left the house.

Yujing called her brother, the father of the Lin boys, to report the assault, Hernandez said. He and his wife went to the hospital to help his sister, and brought her home with them after she was released from the hospital later that morning.

Nothing appeared amiss at the Lin house, Hernandez said, so the adults slept for a short time, assuming the boys were sleeping as well.

The next morning, the father took his sister to look for a new place to live and to talk to investigators about the assault, Hernandez said.  His wife slept until late morning and discovered her oldest son when she went to wake the boys.

William Lin was a junior at Arcadia High School and his brother was a freshman, Arcadia Unified School District spokesman Ryan Foran told the Pasadena Star-News. William was described as an excellent student with a passion for science who was very active on the school's Science Olympiad team. Anthony was described as outgoing and funny.

The school district issued a letter of condolence to the boys’ family and friends, and organized a vigil which drew several hundred people on Jan. 25.

The district attorney’s office is pursuing extradition to bring Shi back to the United States for trial. The Times reported that Shi was denied bail during his extradition proceedings Feb. 1.

Extradition will be a complicated process, The Times has reported, in part because Shi is a suspect in several bribery cases involving government officials in Shenzhen, China.

During a hearing in Hong Kong last week, Shi told the court he was innocent and wanted to come back to the United States to clear his name, The Times reported. But Shi was also reportedly talking incoherently when he was arrested and told the judge he was confused about what was happening to him.

“We’re working with the Department of Justice now,” Hernandez said. “I think the D.A. and DOJ want to expedite the extradition, but we can only go as fast as the system will allow us to go.”

Do you have information to share about the life of William Lin ? The Homicide Report needs your help. Please fill out this form or e-mail us at homicidereport@latimes.com.