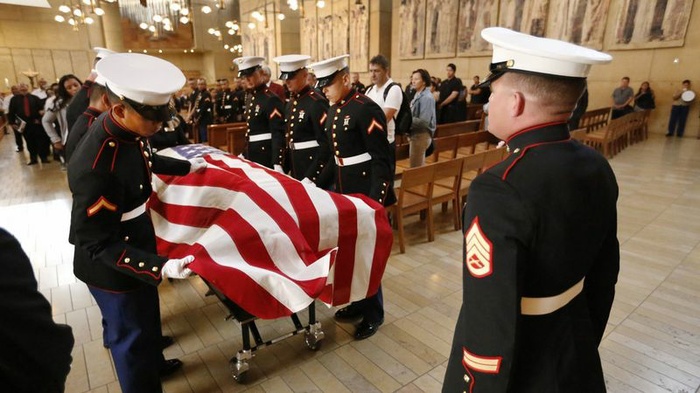 Two gang members were convicted last week of killing a 19-year-old Marine while he was on leave from Camp Pendleton visiting family and friends in South Los Angeles nearly three years ago.

A Los Angeles jury deliberated less than two hours Wednesday before finding Oscar Aguilar, 28, and Esau Rios, 31, guilty of first-degree murder and shooting at an occupied motor vehicle. The jury also found Aguilar guilty of being a felon in possession of a firearm and determined that the shooting was committed for the benefit of a criminal street gang, according to the Los Angeles County district attorney’s office.

Aguilar was convicted of possession for transportation or sale of narcotics in 2015, criminal threats in 2011 and assault with a deadly weapon and vandalism in 2008, according to a criminal complaint filed by prosecutors.

He and Rios will face maximum sentences of 107 years to life and 50 years to life in state prison, respectively, at a hearing July 8.

Carlos Segovia-Lopez had just left his girlfriend’s house in the 2100 block of West 31st Street in Jefferson Park about 11:30 p.m. Sept. 16, 2016, when he saw people trying to break into a nearby vehicle, police said at the time.

On Rios’ orders, Aguilar approached Segovia-Lopez, who was sitting in his car at 31st Street and St. Andrews Place, and shot him once in the head, according to court testimony.

Segovia-Lopez was found slumped in his black Dodge Charger and taken to a hospital, where he was pronounced dead three days later.

Ricky Valente, 21, whom prosecutors charged with a count of accessory after the fact because they say he knew about the killing, pleaded no contest in June 2018. He is expected to be placed on three years of formal probation during his sentencing hearing June 26 as part of a plea agreement, according to the district attorney’s office.

Segovia-Lopez had joined the Marines about eight months before his death and was known in the community for his volunteer efforts.

A graduate of James A. Foshay Learning Center, Segovia-Lopez volunteered with LA on Cloud 9, a group that helps the homeless and animals.

He led a youth group called Teen Project, which aimed to motivate high school students to finish school, and also served as a junior counselor in South Los Angeles for USC Troy Camp, a mentorship program for youths.

Marine pallbearers prepare a flag-draped coffin during a funeral service for Lance Cpl. Carlos Segovia-Lopez at the Cathedral of Our Lady of the Angels in 2016. Credit: Al Seib, Los Angeles Times