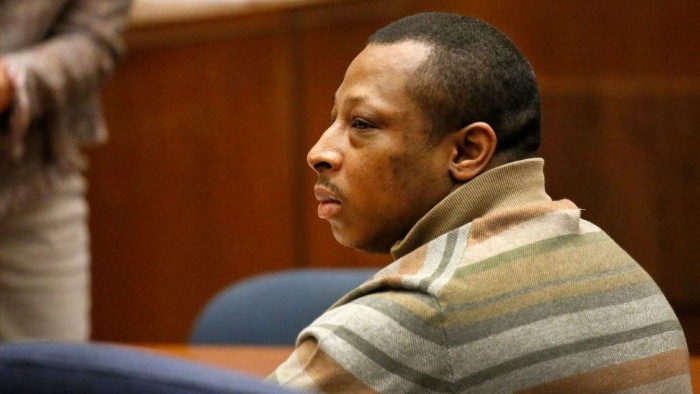 An Inglewood man was convicted Wednesday of raping an 11-year-old girl and forcing her into prostitution in early 2015, but a jury was not able to reach a verdict on charges that he killed and robbed a 21-year-old transgender prostitute three months earlier.

Robert James Spells, 33, also was accused of lewd acts with the girl, who was seen in online advertisements for prostitution wearing a white bra. Surveillance video showed the girl walking in the parking lot of a South Los Angeles motel in the early-morning hours of Feb. 15, 2015, around the same time that Spells rented a room there, according to evidence presented in court.

The girl, who is autistic and described as having the mental capacity of an 8-year-old, had run away from a foster home days earlier, Deputy Dist. Atty. Theodore Swanson said.

"He knew exactly how old she was. He knew she was young, and he took advantage of that," Swanson told a jury Monday in a downtown Los Angeles courtroom. "He's bigger than her. He's stronger than her. He's a pimp."

A yellow dress, white bra, hoop earrings and sandals were found in a dark-colored sedan that Spells was seen driving days before the girl was taken into police custody. Forensic tests showed the girl's DNA on the clothing.

During the trial, the girl testified that Spells raped her and that she worked for him as a prostitute.

"They selling me like they selling ribs or something," she testified during the trial.

When the girl was taken into custody by Los Angeles police in February 2015, authorities found that the cellphone she had was linked to Spells by his email and Instagram accounts.

"Why would anyone need a two-hour room in the middle of a high prostitution area at 2 a.m.?" Swanson argued during closing statements.

Defense attorney Frank Duncan said during closing arguments that the girl gave inconsistent statements and could not be trusted.

"This case is sort of fun for her," he said. "She is important for the very first time in her life."

Prosecutors also argued that Spells shot and killed Deshawnda "Ta-Ta" Sanchez, 21, during an early-morning robbery in the 6100 block of South Wilton Place three months before the crimes involving the girl.

Sanchez was shot dead on Dec. 3, 2014, on the front porch of a home while banging on a door for help. She had earlier called 911 saying she had been robbed and assaulted.

Sanchez worked in the area as a prostitute, and a witness testified that she had a large black purse with cash in it when she was dropped off that morning. The jury could not agree on a verdict in the killing. Duncan suggested that Sanchez was the robber, not Spells, and cast doubt on previous testimony given by a woman who said she had seen Sanchez and Spells together.

Prosecutors now must decide whether to retry the murder case. Spells faces a sentence of life without the possibility of parole in the crimes involving the 11-year-old girl.

Photo: Robert James Spells appears in court to hear a verdict on charges that he killed a 21-year-old transgender woman in December 2014 and forced an 11-year-old girl into prostitution in February 2015. Credit: Al Seib / Los Angeles Times