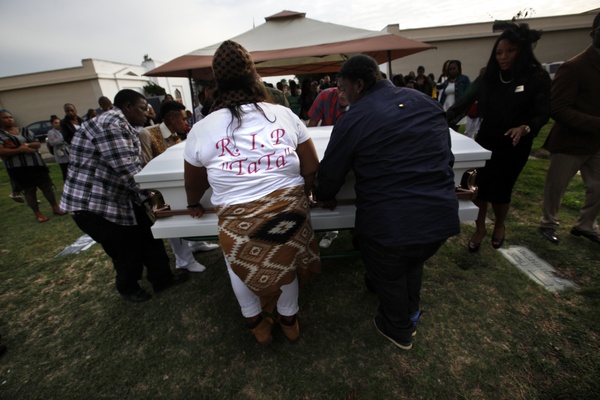 An Inglewood man was charged Monday with shooting a 21-year-old transgender woman during a robbery and forcing an 11-year-old girl into prostitution, according to the Los Angeles County district attorney’s office.

Robert James Spells, a 30-year-old black man, was charged with one count of capital murder with a special circumstance of killing someone during a robbery. Spells, who is due in court Monday, was also charged with six other felonies including second-degree robbery, offering the child to men for sex and two counts of aggravated sexual assault of a child.

On Dec. 3, 2014, Deshawnda “Ta-Ta” Sanchez called 911 at about 4 a.m. stating she had been robbed and assaulted. While pounding on a door for help in the 6100 block of S. Wilton Place, she was shot. Police have not specified what was stolen from Sanchez but said her call was key in identifying Spells as the suspect.

DNA and residential surveillance footage also helped police connect Spells to the crime. In addition, he is accused of forcing an 11-year-old girl into prostitution and sexually assaulting the child between Feb. 7 and Feb. 16.

Spells was featured on a UCLA social justice club’s blog in September 2014 and described as a man “full of compassion and charisma overall in spite of society.”

Spells said that Homeboy Industries helped him set and maintain educational goals and gave him a support system. He said that before he became involved with the organization, “I was going in and out of jail every 90 to 120 days, that is a phenomenon I haven’t had any more, my life is more stable now.”

Homeboy Industries did not respond to a request for comment.

LAPD Det. Chris Barling told The Times that Spells knew Sanchez but declined to discuss further details about their relationship. Although prosecutors did not file hate crime allegations against Spells, Barling said that Sanchez’s gender identity is believed to have been a contributing factor in the attack.

Sanchez was one in a string of transgender killings in Southern California in recent months. In the last year, four transgender women of color, including Sanchez, have been killed in the region.

Sanchez's sister, Diana Williams, said she has had a hard time sleeping since the killing and worried that the case would go unsolved. She said her sister, who loved to style hair, do makeup and talked about becoming a doctor or a lawyer, didn't deserve to die in such a brutal way. Sanchez grew up in Compton and Watts.

“It's not complete until we go to court and I see for myself,” she said.

Spells faces life in state prison without parole if convicted. The case is still under investigation.

Anyone with information is asked to call the LAPD’s Criminal Gang Homicide Division at (213) 485-4341.