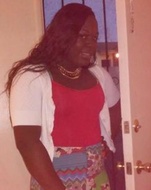 Deshawnda Sanchez, a 21-year-old transgender black woman, was shot and killed Wednesday, Dec. 3 in the 6100 block of South Wilton Place in Chesterfield Square, according to police and Los Angeles County coroner’s records.

Residents in the area called 911 about 4 a.m. to report a robbery, said Det. Chris Barling with the Los Angeles Police Department.

Police arrived and found Sanchez wounded on the front porch of a home, Barling said.

“We believe she was robbed and then the suspect shot her,” he said. It is unknown what was taken from Sanchez, who did not live in the area.

Sanchez was pronounced dead at the scene at 4:12 a.m., according to coroner’s records.

A light-colored compact car was seen fleeing the scene.

The coroner’s office identified Sanchez as Deshawn Lamar Bradley, a 21-year-old man. Bradley also went by Deshawnda Sanchez. Since Sanchez identified as a woman, The Homicide Report has done so as well.

Share a memory or thought about Deshawnda Lamar Sanchez

Poor lady ! She had a long life to life rip