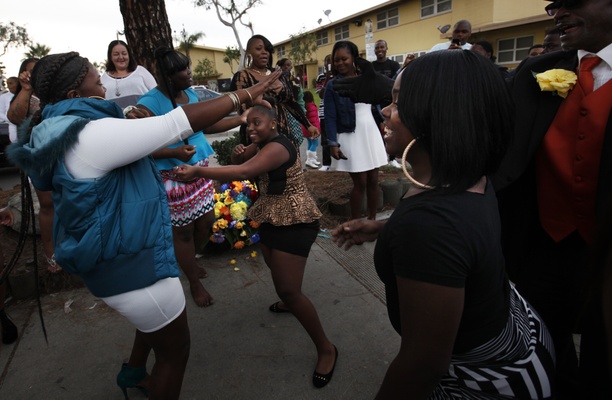 They gathered to say goodbye to “Ta-Ta."

So when professional pallbearers in orange waistcoats and black top hats wheeled in her white casket, shrieks of emotion erupted from the front of St. Matthew Baptist Church in Vermont Square.

Deshawnda Sanchez, a transgender woman who went by “Ta-Ta,” was 21 when she was killed in Chesterfield Square.

Family and friends remembered her as outgoing and funny. She loved to style hair and do makeup.

Sanchez, who had 11 siblings, was a longtime member of a drum team called the Unique High Steppers. She dreamed of becoming a doctor or a lawyer.

At the memorial on Dec. 19, Sanchez's twin sister approached the microphone.“I miss you,” she said through tears. “That’s all I have to say.”

About 4 a.m. on Dec. 3, neighbors in the 6100 block of South Wilton Place could hear Sanchez screaming. A robbery had turned violent. People called police to report gunfire. Once officers arrived, they found Sanchez wounded on the front porch of a home.

Police have not yet pieced together what was taken from Sanchez during the robbery and it is unknown whether gender identity was a motivator in Sanchez's slaying.

After the killing, vigils were held in memory of Sanchez, and family members expressed suspicion that the violence could have been a hate crime.

Sanchez's death marks the third known killing of a transgender woman in Southern California this year. On June 12, the body of Zoraida “Ale” Reyes, 28, was found in the parking lot of an Anaheim Dairy Queen. Reyes was a transgender activist, and her death raised concerns that she was targeted because of her identity.

About four months later, on Oct. 2, Aniya Knee Parker, 47, was fatally shot in East Hollywood about 3 a.m. after a struggle over her purse.

This year, 12 transgender women of color have been killed in the United States, including Sanchez, according to the National LGBTQ  Task Force. That number could be higher, because many law enforcement agencies don’t keep track of transgender killings.

Studies have found that people who identify as transgender are more likely to be victims of violence, said Kylar Broadus, director of the Transgender Civil Rights Project.

“We shouldn’t be killing people because we don’t understand them,” he said. 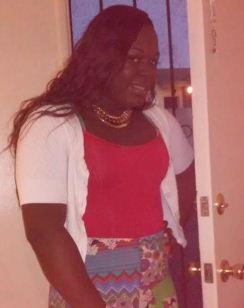 Chandi Moore, a transgender activist, met Sanchez at least four years ago in an empowerment group for African American transgender women. Sanchez stood out to Moore as a person who owned her identity.

“She had such voice,” she said.

Sanchez was a model to others, Moore said, and she expected her to make a difference in the transgender community.

“She was all about being an independent woman,” she said. “She was very vocal in being secure in herself.”

Outside Sanchez’s funeral, her cousin, Shanika Boykin, paused to gather her emotions. She grew up with Sanchez in Compton and Watts.

“She brought a light into your life,” Boykin said.

After the funeral, a procession of vehicles drove to the Nickerson Gardens Housing Project in Watts.

They parked near the front, only feet from a memorial wall painted with the names of people who have been killed. Then, they had an impromptu dance party, a homage to Sanchez’s vibrant spirit.

People took photos, and the back door to the hearse was opened wide, the casket in view. Traffic clogged the streets as people laughed.

After about 10 minutes, the party was over. The group proceeded to the cemetery to bury “Ta-Ta.”

Photo, above:  Relatives celebrate the life of Deshawnda Sanchez, a 21-year-old transgender woman, during a funeral procession which passed Nickerson Gardens in Watts and stopped for a moment. Credit: Bob Chamberlin, Los Angeles Times

I remember deshawnda from elementry school, and living around the way in the same neighborhood. She was fun, loving, and always fashionable. I will truely miss her and my prayers go out to her family.

Might have been mistake by the perp to be a women only later to find out it was a man and probably got enraged with error.

It seems like she was in the wrong place at the wrong time.