Questions linger for family a year after a 19-year-old's slaying: 'Who did it and why?'

For years, La Kiesha Marshall’s family has gathered at the home she shares with her mother in Gramercy Park. On Sunday, as cousins and aunts set up tables and a barbecue for sausages, hot dogs and ribs, the guest of honor was missing. 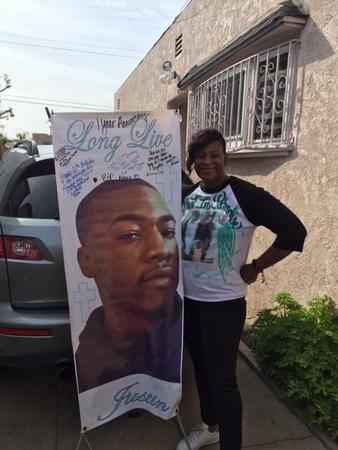 Exactly one year to the day, Marshall’s son, Justin Logie, 19, was shot and killed outside a gathering in the 100 block of East Florence Avenue.

Los Angeles police Officer Tom Callian said that inside the event at a club about 2 a.m., a dispute flared up. As people walked outside, gunfire erupted. Logie was shot near his SUV, and police are still trying to determine why he was targeted.

In the year since Logie was killed, his mother has tried to keep his memory alive. She has started a weekly group for grieving family members, which she likes to call an “evening of remembrance.” She’s gone to events for victims of crime to share her experience.

Marshall saved a banner with her son’s face, and as people walked past it into the backyard, they could sign a guestbook or write a message. People sat in patio chairs as balloons with ‘Happy Anniversary” swayed overhead.

On Logie’s banner, his mother had written: “Here we are, one year later, you will never be forgotten. Love you, Moms.” At one point, relatives recalled that night.

“That was so hard,” said a cousin, Adrienne Thompson. Thompson, who lives in San Bernardino County, drove to L.A. in the middle of the night after she got the call that Logie had been shot.

“There’s still a million questions, but the first one is who did it and why?” Thompson said.

For Callian, the investigation has proved difficult. More than 100 people were leaving the club at the time of the shooting, but very few have spoken up.

There’s a $50,000 reward for information leading to the conviction of the assailant or assailants as well.

Thompson said that Logie helped his mother in many ways. He gave her rides and babysat his younger brother whenever she needed him.

“He was her right hand,” she said.

Marshall sat in a chair under an umbrella and teared up at the thought of Logie. She said her son was her best friend.

“This person that did this, they just don’t know what they have done,” she said. “Because I will never be the same.”

In the past year, Marshall has lost 30 pounds. With the assailants in her son’s killing still at large, she said she is cautious of her surroundings.“I take a different route each day,” she said.

Sophia Lopez was among several of Logie’s friends at the barbecue. Lopez said she had known Logie for only a year, but in that short time he encouraged her to start her own clothing and hair boutique, a goal she’s still working toward.

Lopez said Logie was like a brother to her, especially after her own brother was incarcerated.

“He filled that void,” she said.

As the group began to eat, a 24-year-old man was shot to death not far from the home. Police had taped off the area, near an elementary school, and were working on notifying his family.

Photo: La Kiesha Marshall stands next to a banner honoring her son, Justin Logie. He was 19 when he was shot and killed last year. Credit: Nicole Santa Cruz, Los Angeles Times

I concur with you Estefania! The county, Los Angeles like many other counties around the Country have similar problems. The common denominator however is Education or lack thereof. An educated couple or single mother would definitely think twice or even thrice about raising a family in a crime infested neighborhood. The message or values you instil in your child is often lost in translation once they see what's really going on in their neighborhood. It's a War going on in many of our communities but yet John and Sally are still expected to do their homework and be good citizens.

And before you or someone says, that these neighborhoods is all some can afford, I'd advise you to do a simple search about the cost of living in Southern California compared other parts of the country. It's ridiculous.

Also, I would love for the LA Times to do a story about how the LAPD BUDGET is one of the largest in Country and continues to increase while Crime also continues to increase. Typically in the short term, when you throw money at a problem it fixes the problem or at least produces tangible results. But in this case, the LAPD are like bystanders. When the crime stats rise they simply ask the taxpayers for more money while doing nothing to prevent the Rise in the first place. There's plenty of blame to go around, but IMO outcomes in young people's lives are much better when they have a quality education. And drop out factories in most inner cities are not personally vested in your child's welfare the way a parent should be.

It's tragic to see how many innocent lives are taken away due to all the violence in the county.Logie is just one of the hundreds of victims that are murdered every year. Cases like this are becoming more and more common in the area where it's starting to feel like nowhere you go is safe. It's even more tragic that people who witnessed the event do not come forward to the police and say something.Yes I know nobody likes the be the "snitch" but coming forward with information can really help find the person who killed an innocent person and give a sense of peace to the family's mourning the death of their beloved. Sadly it's until we're in a situation like this when we realize that we could've helped another family going through the exact same thing, but chose not to.