Man shot on Labor Day was set to move from L.A. within the week 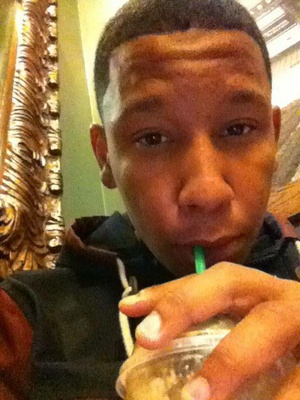 Ethel Gladden was catching up with her sister on her drive home from work on a recent evening when she saw a person lying motionless in the street.

“Oh my God -- somebody got hit,” she said to her sister, then hung up the phone. She stopped her car near West Adams Boulevard and Dalton Avenue, jumped out and rushed toward the man, who was wearing a white shirt, black basketball shorts and white Adidas sneakers.

“Who hit him?” she asked a bystander.

He hadn't been hit by a car, the person responded. He was shot.

Her mind flashed to her nephews, then she leaned over the man and prayed until authorities arrived.

The body was that of 20-year-old James Jay Smith, who, moments earlier, was standing with his back to the street talking to friends. A car pulled up and a person got out and said, “What’s up?” to the men.

The person then fired a gun, striking Smith multiple times, according to a witness. Smith was one of four people shot and killed in South Los Angeles in a series of unrelated shootings on Labor Day.

Smith built his own bicycles and loved to cook. He liked listening to 2-Pac and old R&B music.

His mother, Leah Smith, said he was a “Mr. Fix-It,” a handyman who never really stayed in one place.

Weeks later, Gladden found herself at Smith’s funeral, sharing her experience. Smith’s godfather, Tiaunte Kelly, shook his head as he heard the account shortly before the services started. It was a breaking point for the man, who raised Smith on and off since he was 8 years old.

Others at Smith’s funeral spoke of him helping with groceries, and of the many ways that he touched their lives. A friend of Smith who witnessed the shooting walked up to the microphone, his face sullen.

“That could have been me,” he said.

Skipp Townsend, a gang intervention worker, told the crowd what he sees in the streets.

“This is unnatural,” he said, referring to the killing of Smith. What hurts most, he said, are the people who condone it.

Smith approached Zachery, who was preparing food, and said he was hungry.

“'If you could just slide me one of those hot dogs, that would be great,'” Zachery recalled Smith saying.

Smith was due to go to Pittsburgh to live with Kelly the week he was killed. Kelly met Smith more than a decade ago.

An 8-year-old Smith, who was friends with Kelly’s nephew, walked up to his doorstep and asked for a tool to fix his roller skates.

“He took them apart and fixed them, and I went and got mine and said, 'Fix mine,'” Kelly said.

Kelly started helping Smith, whose father had recently been shot and killed, with his homework and paid Smith to run errands. Eventually, Smith and his siblings began staying with Kelly, who had a studio space that he let the children live in with their mother’s permission.

Kelly, who was abandoned by his mother at a young age, said others had helped him out.

When Smith was 16, Kelly took him and his younger brother to Pennsylvania. He stayed until he was 18, when he told Kelly he wanted to reconnect with his family in L.A.

“He wanted to know who he was,” Kelly said.

Photo, above: James Jay Smith. Courtesy of the Smith family.

I miss my bro man. The nicest spirit I've ever met in life. He didn't have much but what he had he shared with those who had none.

Rest in peace young man!! Gone but not forgotten. Xxooxxoo

What a sad life this young man lived for his 16 shorut years. No real family to speak of, no real role models to look towards, and not enough time to formulate a dream of his own. I hope God blessed you with so much more once you reached him.

James Smith was my son's best friend. He was one of the nicest kids I've ever met. He was not involved in any gang but he knew lots of people from gangs all over. James was friendly like that. He was simply in the wrong place at the wrong time. It was a pleasure knowing him since elementary when my son brought him home with a head full of hair he couldn't do nothing with. So my son gave him a hair cut. That was the best day of James life. I would ask James how old are you he would say I don't know you have to ask my mom. James finally got his age right at 16 boy I enjoyed him he was so funny he called every small female shawty.

My two cents is this: He forgot the old adage about being judged by the company you keep.

He might have been good in his heart. But when you are hanging with vermin, you're going to be thought of being the same.

— outsidelookinin
I wouldn't call syscom3's comments worthless. Just because you call it like it is, doesn't make it worthless.

I don't think he was puttin in work but he was hanging with some Van Ness Gangsters. All these youngsters killing and being killed is crazy! When did getting shot dead only to have your "peeps" get shirts made with your memorial painted on it become normal and cool! Look at ALL the young lives lost. Senseless! it's cool to "rep" and then die before you're 30? Sad!

Did he have any gang affiliation?

You know that someone saw a car or these cowards! There must be more than one! They have NO RESPECT OR REGARD for a human being life! These are our loved ones!! Don't you know what you are destroying.. It is God that you will have to Answer to!? If anyone has information regarding these MURDERS on Labor DAy weekend 2014 Call 1-800 222-TIPS tHE CALLER REMAINS ANONYMOUS.