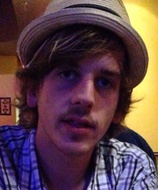 A motel manager conducting a routine room check discovered Brewer’s body on a bed with multiple stab wounds, according to the Sheriff’s Department and coroner’s records.

Brewer was pronounced dead at the scene at 10:55 a.m., said Ed Winter, a spokesman for the coroner’s office.

An autopsy performed showed that Brewer died of multiple sharp force injuries. Investigators are unsure of a motive for the killing.

Share a memory or thought about Robert Leonard Brewer

@ informed1,you know he came for the drugs,and stayed for the cheap motels and dl activity...theres alot in this area.

What was he doing in Westmont? He looks more like a Santa Monica resident than a Westmont resident.

I wonder if this was a drug related crime. Murders like these in hotels are common.

Robee was a great friend of mine. Catch the bastard that did this and give him the death sentence

I was saddened to hear the news of Robert's murder. I pray that his suffering was small. I understand that he had accepted Jesus Christ as his personal Saviour, at a young age. I trust Jesus with his eternity. It may be that God took him home, to lesson his sufferings on this earth, and those of his parents. God bless Robert's parents and give them peace, in the belief in His promises, In Jesus Holy Name. AMEN.