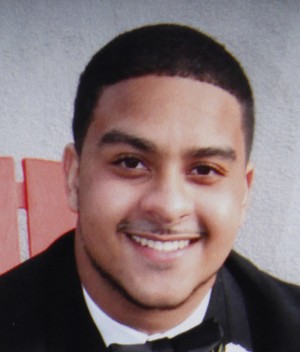 Bijan Michael Shoushtari, an 18-year-old black man, died two days after he was shot Saturday, Aug. 3, in the 4400 block of Crenshaw Boulevard on the border of Hyde Park, according to Los Angeles County coroner’s records.

Shoushtari and two other people were traveling north on Crenshaw Boulevard in a 1973 white Buick Electra shortly after midnight when a light-colored, midsize vehicle drove along the passenger side and a gunman shot at the Buick, L.A. Police Det. Supervisor Sal LaBarbera said.

Shoushtari was sitting on the passenger side of the Buick and was struck several times, LaBarbera said. The two other people in the car were not injured.

Shoushtari was taken to a hospital, where he died Monday, Aug. 5, at 5:37 p.m., coroner's spokesman Ed Winter said.

Detectives are looking for more witnesses.

Share a memory or thought about Bijan Michael Shoushtari

Let's question these people who Bijan was in the car with. They might have had something to do with it.

Whoever killed Bijan Karma will get you and your family.

I didnt know this young man, but its so heartbreaking. I have a son in his very early 20s and it truly is every parents worst fear. This is my neighborhood too and i have had other friends shot and left to die too. The police can't even begin to keep up.with these acts of senseless violence. as a community we must try to stay vigilant, and try to make a difference. My prayers go to this family, who had their lives changed in a moment in time...the family did everything right and still have to pay the ultimate price, this is so wrong. We have a sickness in our society that runs so deep. Children carrying weapons and think it makes them badass, while they are nothing but cowards.you may be the best parents in the world, but for every good parent there are probably a dozen drug and alcohol addled abusive parents and they are releasing monsters into society. Then society bends them even more.try to keep your kids close, dont let them stand out on the porch with their friends, make sure you know who they are with, who's driving and let them know you will pick them up anywhere, anytime, for any reason...

This sounds like a setup car to car shootings usually result in more casualties because these idiots shoot into a car indiscriminately trying to hit as many people as possible, I get suspicious when 2 or more people are in a vehicle and only 1 is dead, makes you wonder, when it comes to murder everyone should be looked at especially the people with him that night. This wasn't a random wrong place@the wrong time thing.

Bijan was a loving cousin, brother, son, friend, and also a child of God. He is really missed and I don't understand how someone could do such a thing to an innocent person such as Bijan. We miss you and love you and are still praying and have faith Bijan.

I miss him so much , he was like a older brother the church days is all I have to remember with him.. I love you B your in a better place

Didn't know him but i feel the family's pain because I'm a human being that respects life. and I'm a firm beleaver that parents aren't never suppose to see their kids get put in the ground unless it's natural causes. I'm tired of our young people falling before their lives even truly begin! Our kids are dying in the streets like animal and it seems that the World looks at the situation as if there is nothing wrong! This is not what life is about! We have to do something to get this thing turned around! Tim

We love you and miss you dearly bijan!! Love you !!!

Justice will be served !! Continue to watch over us daily !

Please find this cowards. They have to go to jail and they have to pay for it. That was an innocent man.

My sympathies go out to his family. Rest in peace Bijan Michael Shoushtari.

Condolences to the family, but what qualifies one victim and not others for a non family, public funds reward for a capture? Makes me feel like my loved one was a second class citizen. My loved one was hard working, held a long term job, and paid taxes. Where is his offer for a reward for his killer.

My sincere sympathies go out to the Shoushtari family. May God comfort you and give you peace.

Oh Bijan Bijan. Sam you were one of my dearest friends growing up. I remember holding Bijan as a baby and toddler. Worlds cannot express how heartbroken I am. I cannot understand how something so tragic could happy to the family. Marsha, Mano, Ea and Sam. I love you all. - Fia.

I'm very sorry to hear about your loved one. Soon there will come a time when the wicked will have no place in Jehovah God's new system. Because (Psalms 37:10) says: "And just a little while longer and the wicked will be no more." That's a wonderful blessing for you and I. And there is some else that Jehovah said at: (Revelations 21:4) "He will wipe every tear from their eyes and death will be no more." May you have peace and comfort.

I grew up with this family. My heart just bleeds right now knowing this. I'm devastated. So much love to my Shoushtari family. There has to be justice.

Mistaken identity? Great, now these coward scumbags are out there wrecking families without doing the homework.

Find an island, start by dropping the documented gang members there, then continue to deliver them as they appear. Gang tats, misdemeanors, signs, grafitti, etc. If you don't want to go to the island, then don't play the part.

That first delivery would probably take care of 50% of the sensless killings, whether they're currently on lockdown or not. I would imagine it would be kinda hard to give a green light from the middle of the Pacific!

Condolences to the Shoushtari family, I couldn't even imagine hearing this news. May God be with you during this unfathomable time. RIP Bijan

Why was he the only one shot if there were 3 people in the car, that's a bit strange don't you think? last time I checked these idiot gang bangers can't shoot for S**T that usually means everyone gets hit, but in this case every shot was well placed into the victim, if it was 1 shot then that would make sense it would be a hit or miss for anyone in the car, but several rounds and only the victim gets hit. ???????????

this is so sad. they still want to go around doing drive byes killing innocent people. drop the guns, what are you getting out of the red or blue nothing but a ticket
straight to hell.

Were words exchanged with the shooter, maybe his friends got into it with the other people and the victim paid the price, how is it that only the victim was shot and the other two walked away, something stinks almost looks like a set up

Bijan was a truly giving, caring and considerate young man who sought to help people, not hurt anyone. The community lost a future Firefighter/EMT whose passion would have helped others. Another innocent young man gunned down senselessly by cowards and thugs who roam our streets like they own something, but who are worth nothing and take everything from everyone else.

We are so shocked and sad about this unbelievable, tragic event. We are praying for your family to receive the grace you need to lay your beloved son to rest. He is with the Lord and at peace. We pray the evil perpetrator will be caught and prosecuted. God bless you and give you the strength to survive this tremendous loss.
Peace of Christ, Lily and Mike

There was a time when it was safe in this area. You almost never hear of cops shoplifting or forging checks, but these days, think again!

This child was in the youth program at his church and adored by his family and many friends. Please help solve this crime. I'm praying for his family.